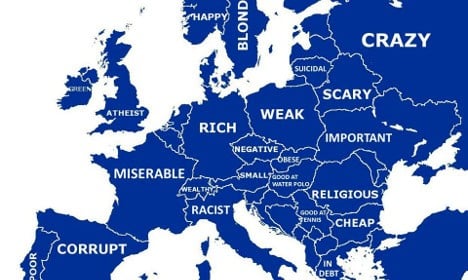 Poor Denmark... too small to even fit their stereotype on the map.
May 9th marks Europe Day, an annual celebration of peace and unity.
In honour of the day, with a little help from Google's autocomplete function, we compiled a list of the top preconceptions about citizens of nine European countries.
While the predictive autocomplete may not be the most scientifically reliable source, it does give us a good idea of the assumptions and questions people have about Europeans.
We typed in phrases like “Why are the Danes so…” and “Why do the Germans…” and Google provided the rest.
So here's what Google users have to say about Europeans.
What Google says about the Danes They’re happy
This one is hardly a surprise, given Denmark’s dominance of various ‘happiness’ surveys over the years. Is the answer the country’s generous welfare system, the work-life balance or maybe it’s just all of that cycling? It’s hard to say for sure, but clearly it’s not the weather.
They’re friendly
The Danes may be seen as extremely happy, but when you are consistently ignored on public transportation, at the grocery store and even by fellow parents while dropping off your children, it’s easy to answer a firm ‘no’ on this one. But most Danes will argue that they are not being unfriendly, they are merely respecting each other’s right to privacy.
They're great at English
The Danes by and large speak very good English, particularly in the larger cities. Danish students are taught English from the first grade, so no wonder the Danes have been ranked the best non-native English speakers in the world (yeah, they were later beaten by the Swedes, but Danes are still third best).
Click here for more of what Google says about the Danes…
What Google says about the Swedes

Photo: Let Ideas Compete/Flickr
They’re all blonde
Ah, one of the most common stereotypes about Swedes. The answer, in truth, is that so many Swedes dye their hair blonde. That's (partly) why there are so many of them.
They’re weird
Swedes have a reputation of being “weird”? Really? You mean, a nation where the locals eat fermented (read: rotten) fish, dance around a phallic pole singing about little frogs at Midsummer, and celebrate Christmas on the 24th of December? It's all a perspective thing, perhaps.
Click here for more of what Google says about the Swedes…
What Google says about the French Doesn’t seem much doubt about this one. Lots of recent studies have confirmed that the French, despite having a high standard of living and good healthcare, are “trapped in a malaise”. The suicide rate is much higher than the European average.

Claudia Senik, a professor at the Paris School of Economics, told The Local it may be tied to the French education system, which is too rigid and sets them up to fail. Plus she also said they'd be happier if  they spoke more foreign languages (yes, even English) because they would not feel so isolated.

Firstly it's important to point out that some French people do get fat, especially outside Paris. However France is the country with the lowest obesity rate in Europe. And though France has all kinds of rich desserts, cheeses and other fat-filled food, the French consume with moderation. They generally eat smaller portions and save the rich, heavy stuff for special occasions.

Click here for more of what Google says about the French…

What Google says about the Germans

It's no secret that Germany's economy is Europe's biggest by the standard measure, Gross Domestic Product (GDP). But when considered with population, Germany's GDP is just ninth out of the 28 member states in the EU – behind Denmark, Sweden and the Netherlands, among others – suggesting that while Germany might be wealthy, many Germans are not asset and cash rich.

Germany's modern status as the economic heavyweight of Europe has put it in a more influential position within the EU than ever before – and apparently this power has piqued people's curiosity. Maybe it's the fact that at critical points in the years of economic crisis, Germany has been seen as a tough paymaster by its neighbours.

Click here for more of what Google says about the Germans…

What Google says about the Spanish With so many scandals sweeping Spain, this search isn’t surprising. But the answer is far from clear. Is it something cultural, an extension of the idea of ‘enchufe’, or ‘you scratch my back and I’ll scratch yours’? Or perhaps Spain’s corruption has something to do with a lack of institutional transparency, or with the tendency to make hay while the sun shines…

Yes, the old stereotype of Spaniards taking siestas and not liking work is one of the main questions English-language users ask Google. Is there scientific proof? Not really. Some experts would say people from warmer climates have more of a carpe diem attitude towards life and that Spain turned to hedonism after the end of its dictatorship. But recent studies actually suggest that Spaniards work longer hours than the rest of Europeans.

Click here for more of what Google says about the Spanish…

What Google says about the Italians

Italians are usually known for being warm and welcoming, but high profile attacks against Italy’s former first black minister, Cecile Kyenge, or the country's treatment of migrants languishing in detention centres, have done a lot to tarnish that image.

Their guys are cute

So now some good news: the Italian stallion is alive and well – at least as far as Google users are concerned. We're wondering which current stars might be giving Italian manhood such a good name – could it be ex-footballer Alessandro Del Piero, fashion kings Dolce & Gabbana or has the popularity of the 'hot priests' calendar' boosted their reputation?

Click here for more of what Google says about the Italians…

What Google says about the Austrians

Ouch. Many predictive Google searches ask questions that revolve around this theme. The country shares a long and troubled history with its neighbour to the north-west, but whoever has the naivety to ask an Austrian why they are not part of Germany is likely to receive a nasty look, or maybe have a schnitzel thrown in their face. Though it is smaller and has many similarities, Austrians take pride in their sovereignty as a separate nation from Germany.

Surely not! Maybe this is all those Germans writing questions into Google just to fix the outcome? Are Austrians really stupid? They've had a few famous scholars and academics over the years.

Click here for more of what Google says about the Austrians…

What Google says about Switzerland

They are so bloomin' wealthy

Academics have long asked what fundamental qualities helped Switzerland get rich. An early appreciation of the value of the service sector is one theory. Not being blasted to smithereens in two world wars undoubtedly also played its part. And they are so healthy? Well, here the world seems to be impeccably informed too. Switzerland tops the World Economic Forum’s index for health and welfare, boasting the highest life expectancy in the world. Perhaps the fact that it has the world’s second best healthcare quality, second most accessible healthcare and best water sanitation in the world has something to do with it.

Click here for more about what Google says about the Swiss.

What Google says about the Norwegians? Norwegians are happy apparently and its probably something to do with how wealthy the country is and safe (normally) and the beautiful scenery. And they get a white Christmas every year, or at least snow in winter. And when they go abroad they must be staggered how cheap a beer is or a coffee.

Click here for more about what Google tells us about Norwegians

In case you're wondering what Google says about the British, the top results are asking why they're so rude… and also why they're so polite. Another response that popped up was “Why are the Brits so full of grief and despair”.

Unfortunately we were not able to look at every country in Europe but here's a map we drew up showing the main results. 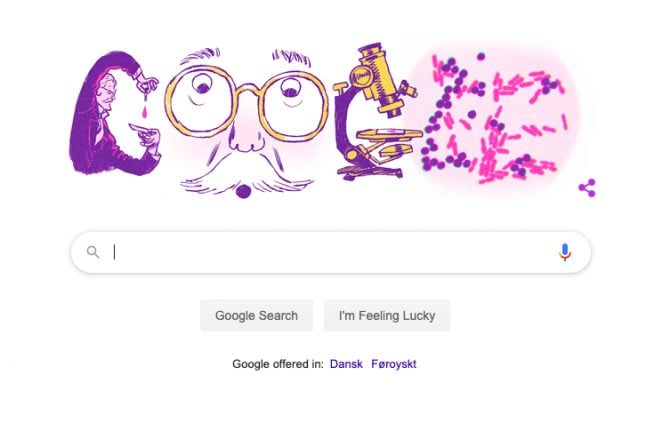