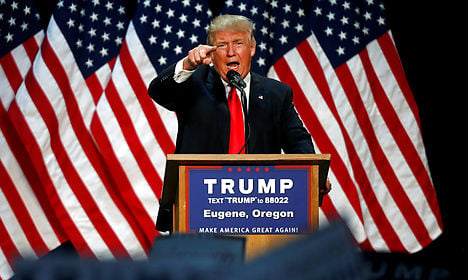 Donald Trump has all but wrapped up the Republican nomination. Photo: Jim Urquhart/Scanpix
In a YouGov survey conducted for Søndagsavisen, just four percent of Danish respondents said they want ‘the Donald’ to move in to the White House.
David S. Miller, a spokesperson for Democrats Abroad Denmark, said he wasn’t terribly surprised by the poll results.
“That four percent of Danes in the poll support Donald Trump seems about right. Trump is a reality TV star, including in Denmark. Some Danes may look up to him as a so-called self-made man, although that label is far from the truth,” Miller said.
“There may even be some Danes in the poll who may be a bit anarchistic and dislike the political system in Denmark and the US, and think the US and the world deserves someone like Trump,” he added.
Trump's political rise has been met by a mix of disbelief and trepidation in Denmark. Foreign Minister Kristian Jensen has said that it would be “much more difficult to work with the US” if Trump becomes president.
“You’d never know what he will believe tomorrow. He changes opinions like the rest of us change underwear,” Jensen told broadcaster DR.
Several other Danish politicians have slammed Trump for some of his more outrageous statements and even warned that if he were to assume the White House, Denmark would have to reconsider its relationship with the United States.
With that backdrop, the four percent support amongst Danes might have been predictable. Miller said he was more surprised by the fact that Hillary Clinton had such a commanding lead over her rival for the Democratic nomination, Bernie Sanders.
The former Secretary of State was the pick of 55 percent of Danes while the Vermont senator was the preferred choice of just 19 percent of Danes, despite his open admiration of Denmark and the Nordic welfare model.
“Although Bernie Sanders’ social and economic policies reflect how things are run in countries such as Denmark, he doesn’t have the name recognition of Hillary Clinton or Donald Trump. Also, many Danes lean politically to the centre or right of centre, and I imagine that Hillary Clinton’s more moderate policies relative to Bernie Sanders may appeal to them more,” Miller said.
Miller said that if more Danes were better informed about the differences between the two Democratic candidates, Sanders might poll better.
“While a majority of Danes support Hillary Clinton, her policies call for an expansion of the Affordable Care Act and wants to make US colleges more affordable. Bernie Sanders on the other hand supports single-payer universal health care and free public college tuition, which exist in Denmark but not the US. I think the vast majority of Danes would be appalled if a Danish politician called for doing away with the current Danish health care system or free college tuition,” he said.
Sanders could perhaps find some solace in the fact that while he doesn’t do well when competing for the hypothetical votes of Danes, he was the clear winner in a Danish contest that actually counts. US expats in Denmark gave the Independent from Vermont a runaway win in the ‘Global Primary’ held in March.
As a whole, US expats living abroad strongly favoured Sanders over Clinton. Democrats Abroad will send 17 delegates to the national convention. Of the 13 pledged delegates, nine went to Sanders and just four to Clinton.
Url copied to clipboard!