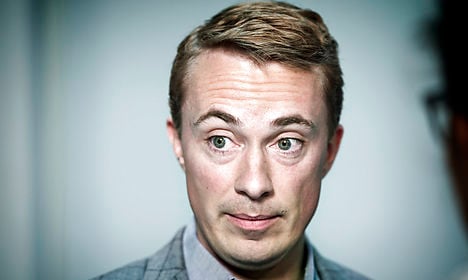 Messerschmidt has been found to have used the funds, via the MELD and FELD organizations of which he was chairperson, inappropriately.

The MELD and FELD funds were used to promote the profile of Messerschmidt’s nationalist Danish People’s Party, transgressing EU rules for their use.

An analysis of MELD and FELD’s activities by accounting firm Ernst and Young also revealed “comprehensive” problems with record keeping relating to the use of the 2.9 million kroner of EU money, says the DR report.

“The financial records do not, in our view, give a true and fair representation of the organizations’ net worth nor of its annual results,” says an Ernst & Young report obtained by DR.

The European Parliament’s own investigation into the matter has now concluded that Messerschmidt – directly responsible for the use of funds as a board member in the two organizations – used the EU money in a way directly in breach of EU rules.

While MELD and FELD are allowed to apply for EU funding for “information campaigns”, this must not encompass campaigns for national elections or referenda.

But Messerschmidt used the money to finance campaigns just prior to last year’s general election as well as December’s legal exemption referendum. In the campaigns, Messerschmidt, along with DF leader Kristian Thulesen Dahl, were the central elements.

The referendum campaign also featured a video that explicitly encouraged voters to cast their votes in a specific way.

Messerschmidt had previously claimed to the EU parliament that the video was not part of the referendum campaign since it was filmed before a date was set for the vote, and that it would be removed from social media before the referendum date was announced.

The parliament has rejected the Danish MP’s argument, however, saying that it was clearly aimed at the referendum. The videos also remained on social media after the referendum date was confirmed.

Both the EU parliament and Ernst & Young reports also found 1.2 million kroner ($184,000) to have been paid by MELD and FELD for “consultancy work.” This money, which forms part of the 2.9 million kroner total, must also be returned to the EU.

EU General Secretary Klaus Welle will therefore recommend that MELD and FELD refund the money when the EU’s presidium meets in Strasbourg on Monday.

If the two organizations are not in a position to return the money, it looks likely that the responsible board members will be asked to foot the bill, with legal proceedings possibly being set in motion on Monday, according to DR’s report.

Messerschmidt has denied any wrongdoing in relation to the use of the EU money in a Facebook post on Friday, calling it “politically motivated” and highlighting similar referendum campaigns by other parties.

“The EU is under enormous pressure from us EU sceptics,” wrote Messerschmidt on Facebook.

“They are doing all they can to harass us and and are fearful of the consequences of both the Danish “No” vote in December [to retain opt-out rights on EU lawmaking on justice and home affairs, ed.] as well as the Dutch one last month.”

Messerschmidt also stated that he would refuse to return any of the money used by MELD, which he describes as “expenses.”