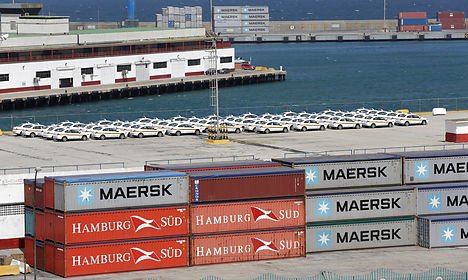 Maersk containers at La Guaira port in Venezuela. Photo: Marco Bello/Scanpix
“While market conditions remain challenging, we continue to adjust our cost base to the new conditions and maintain a good operational performance across our businesses,” Niels Andersen, the chief executive of Maersk which runs the world's biggest container shipping line, said in a statement.
Net profit fell 86 percent to $214 million (€186 million) as revenue declined 19 percent to $8.54 billion from the same period a year ago.
The fall in revenue was “predominantly due to a 37 percent lower oil price and 26 percent lower average container freight rates,” according to the group.
However, shares in the company rose as profit came in above expectations. Analysts polled by Bloomberg had predicted a net profit of just $38 million in the period.
“Management has had to slash costs over a long period and they have succeeded with that for another quarter,” Alm. Brand analyst Michael Friis Jorgensen told Danish news agency Ritzau.
Everything “that is not controlled by global container and oil prices they deliver on”, he added.
Cost cuts helped Maersk Oil lower its break-even oil price to $40 to $45 per barrel from a previous level of $45 to $55.
Stripping out exploration costs, its operating expenses fell 21 percent.
Shipping unit Maersk Line, seen as an international trade bellwether, saw a 95 percent drop in net operating profit after tax to $37 million.
“Container freight rates declined across all trades, especially Maersk Line's key trades to and from Europe as well as Latin America and North America,” the company said.
Shares in Maersk were 5.1 percent higher in late morning trading on the Copenhagen bourse, where the main index was flat.