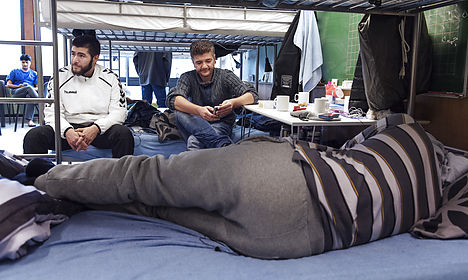 Asylum seekers at Asylcentret Havneskolen in Rødby. Photo: Claus Bech/Scanpix
Responding to an inquiry from parliament’s Immigration, Integration and Housing Committee, Støjberg said that while the vast majority of withdrawn applications belonged to Iraqis and Iranians, there were also nine Syrians who have dropped their claim.
That latter fact did not sit well with the committee’s chairman, Martin Henriksen of the anti-immigration Danish People’s Party.
“As far as I know this is the first time that Syrians have chosen to go back to Syria. And that says something about the fact that they are not as persecuted as they say they are,” he told broadcaster DR.
Henriksen said that the large number of application withdraws should serve as proof that those seeking asylum in Denmark are “convenience refugees”.
“They are migrants who are not fleeing directly from war but move around between countries to find the place where they can live the best life,” he said.
Støjberg said that in addition to the 279 asylum seekers who formally withdrew their applications, there could be a large number of others who have left the country without informing officials.
Those who leave through proper channels have their return airline tickets purchased by the Danish government.
Denmark received more than 21,000 asylum applications in 2015, a 44 percent jump from 2014. The number of asylum seekers has dropped significantly since the start of the year, when Denmark implemented border control measures that have since been extended six times.
While 641 asylum seekers entered the country in the week after border controls were introduced, just 45 came last week according to police data compiled by the government.