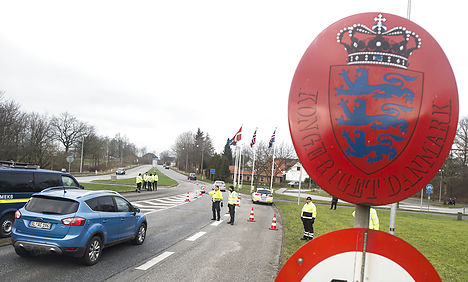 Denmark has extended its border control measures five times. Photo: Claus Fisker/Scanpix
Denmark, Sweden, Austria, Belgium, France and Germany have written a letter to the European Commission calling for current temporary controls to be extended for a period of six months, and for other member states in the Schengen zone to be able to introduce further checks of up to two years if they deem it necessary.
Schengen is the EU's free-travel passport-free area where until recently 400 million EU citizens were able to move around as they wished, while tourists could also travel by land across the zone unhindered.
However since last September, eight of the 26 member states in the area have introduced border checks to help stem and monitor the flow of migrants, under EU rules which allow countries to reinstate checks in certain circumstances for a maximum of eight months.
Germany, the first to close its borders will reach its time limit in May. Denmark, which started performing checks at the German border in January, will follow in September.
The Danish government renewed its border control measures on Monday, the sixth such time it has done so since putting them in place at the start of January. The newest 30-day extension will keep the controls in place through June 2nd.
As has been the case with every previous extension, Integration Minister Inger Støjberg said Denmark's measures remain necessary as long as Sweden keeps enforcing ID checks.
“There is a continued pressure on Europe's borders and migrants and refugees are finding alternative routes when borders are closed,” she said in a press release.
Støjberg spent Monday observing Danish border control measures at Frøslev and Padborg.
“The police are carrying out a huge job in connection with our border controls and it is completely necessary work that I look forward to seeing in action. There are still large numbers of refugees and migrants coming to Europe and we need to keep tabs on who is entering the country at the Danish-German border,” she said.
Migration patterns in Europe have shifted since controls were stepped up last year, stopping thousands of refugees taking the previously popular Balkan migration route to northern Europe.
The proportion of refugees reaching western Europe has also fallen as a result of the deal reached between the EU and Turkey and March, which sees migrants and refugees sent back from Greece to Turkey.
However figures from the International Organisation for Migration suggests that the total number of migrants arriving by boat to Italy or Greece increased in the first four months of 2016, compared to a year earlier.
Denmark received more than 21,000 asylum applications in 2015, a 44 percent jump from 2014, but significantly fewer than its neighbour Sweden, which registered 163,000 asylum applications in the same year.
The number of asylum seekers in Denmark has dropped significantly this year, from 641 in the week after border controls were introduced to just 45 last week, according to police data compiled by the government.