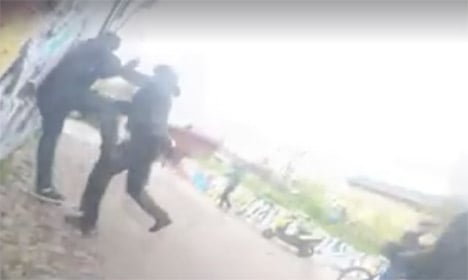 A video still from the Christiania documentary group Cadok shows a police officer throwing a man against a wall. Screenshot: Cadok
While recorded confrontations with the police in Christiania are nothing new, the violent nature of one of the videos has led to widespread sharing on social media and even an offered reward for information on the officers involved.
The video shows police officers running through Christiania and hitting people with their batons amidst scenes of chaos. Police are also shown detaining a man while onlookers yell that the man can’t breath. Another clip shows a number of police officers pulling a handicapped man out of a wheelchair.
A videographer filming some of the action is left bloodied and in need of an ambulance.
See it here. Story continues below.
The video had been shared over 8,000 times as of Friday morning and a collection has been established to raise funds for Cadok’s damaged video equipment.
While Cadok wrote on Facebook that “police suddenly began hitting everyone who was watching”,  Copenhagen Police Commissioner Steffen Steffensen said that officers were responding to provocation.
“There were some people who were aggressive and yelling very loudly. A large group of people began throwing rocks and bottles and a colleague was hit in the arm. Our leader on site said that the batons should be drawn and that the officers should run through the crowd,” he told news agency Ritzau.
“It’s not our fault. We were put on this earth to combat the cannabis trade in Christiania,” he added.
See also: Danish gov snubs call to clear Pusher Street
Former police officer and current libertarian activist Lars Kragh Andersen found the video footage so disturbing that he offered a monetary reward for information on the involved officers.
“There is 5,000 kroner waiting in cash or Bitcoins to the person who can identify one or more of the violent assailants by name, address, photo and telephone number,” he wrote on Facebook.
Andersen has previously released the personal information of a number of high-profile politicians, including the CPR number of former Prime Minister Helle Thorning-Schmidt. He told Metroxpress that he didn’t encourage physical revenge on the involved officers but encouraged public shaming of the “assailants”.
“I will release the information to the public and then people can decide for themselves what to do with it,” he said.
The Thursday video followed one released by Cadok on Wednesday that showed police officers arresting four individuals and pushing people out of the way of their operation. See that one here:
The police actions at the end of April came after what Cadok called “a relatively peaceful month in which we didn’t see the police so much”.
Pusher Street has long been a flashpoint for confrontation and controversy. Since its establishment in 1971, Christiania has been widely known for its open cannabis trade. Although the sale of cannabis is illegal in Denmark, Pusher Street reportedly brings in one billion kroner ($153m, €135m) per year and Christiania is one of the most popular tourist destinations in all of Denmark.