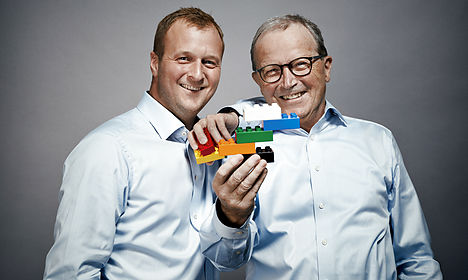 Kjeld Kirk Kristiansen admitted the Ai Weiwei mistake as he handed the company's reins to his son Thomas Kirk Kristiansen. Photo: Lego
The company found itself at the centre of a social media storm last year after Ai said Lego had refused his order of the famous children's building blocks as they would be “used for political works”.
Lego's deputy chairman, the grandson of the company's founder, said the decision to deny the artist a bulk order had been due to “an internal mistake.”
The order, which Ai planned to use for a show in Australia, had been rejected “very low in the organization by our consumer service department,” Kirk Kristiansen told The Wall Street Journal in an interview published on Thursday.
In January, Lego said it would no longer ask what its bricks would be used for when making bulk sales, and that customers displaying their Lego creations in public would instead be asked to make it clear “that the Lego Group does not support or endorse the specific projects”.
Ai has been targeted by Chinese authorities for his advocacy of democracy and human rights as well as other criticisms of the government.
Meanwhile, the family-owned Lego group moved to hand over more power to fourth-generation heir Thomas Kirk Kristiansen, who will take over from his father Kjeld as deputy chairman.
“I am very pleased to say that we are now ready to take certain important steps toward the smooth generational handover that will continue to maintain active family ownership of the Lego Group,” Kjeld Kirk Kristiansen said in a statement on Wednesday.
His 37-year-old son will also replace him as chairman of the Lego Foundation, which owns 25 percent of the Lego Group, but he will remain chairman of family holding company and majority owner Kirkbi.
Kjeld Kirk Kristiansen is ranked the world's 65th richest man according to Forbes magazine, with an estimated fortune of about €11.4 billion ($13.1 billion).