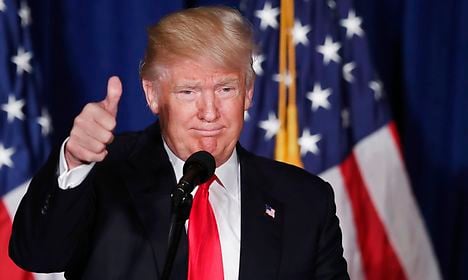 Trump has repeatedly claimed that Obama has damaged the US's reputation and that the businessman can "make American great again". Photo: Chip Somodevilla/Getty Images/AFP/Scanpix
The outspoken businessman, who now appears to be a near-lock for the Republican nomination, said on Wednesday that Obama’s policies have created a lack of international respect for the United States.
Trump used the president’s failed attempt to convince International Olympic Committee (IOC) members in Copenhagen to grant the 2016 Summer Olympics to Chicago as proof that the US gets “no respect”.
According to Trump, Obama shouldn’t have touched down in Denmark without being assured beforehand that Chicago would be picked.
See also: Danish FM: Trump changes opinions like underwear
“Do you remember when the president made a long, expensive trip to Copenhagen, Denmark, to get the Olympics for our country? And, after this unprecedented effort, it was announced that the United States came in fourth. Fourth place,” Trump said while speaking at the Center for the National Interest in Washington.
See Trump's remarks here, story continues below.
“He should have known the result before making such an embarrassing commitment. We were laughed at all over the world as we have been many, many times. The list of humiliations go on and on and on,” Trump added.
The IOC ultimately picked Games to Rio de Janeiro, where the 2016 Games will get underway on August 5th.
Obama travelled to Copenhagen as part of a lobbying effort backed by Chicago city leaders. According to the Chicago Tribune, White House advisers approved the trip because none of the four finalist cities — Rio, Madrid, Tokyo and Chicago — had yet secured the needed votes from IOC officials and that a “personal appeal” from Obama was thought to be enough to tip the scales in Chicago’s favour.
Following Trump’s comments on Wednesday, White House spokesman Josh Earnest defended the president’s foreign policy record while avoiding the Republic front runner’s criticism.
“When it comes to this president's foreign policy, there is no denying that the United States is safer and stronger than we were when President Obama took office back in January of 2009,” Earnest said.