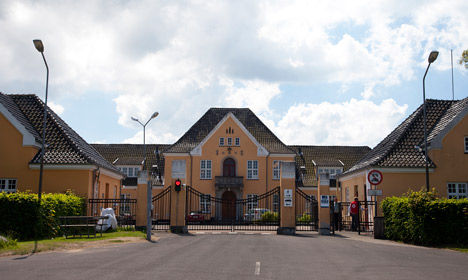 The police had been searching for the man for more than a month before finding him at Center Sandholm. Photo: Miriam Nielsen
The 26-year-old was wanted in connection with a mid-March bust in Christiania’s Pusher Street, an open-air market for the illegal sale of cannabis.
“This is a person we were looking for for a long time but couldn’t find him,” Copenhagen Police spokesman Steffen Steffensen told news agency Ritzau.
Police said that the man was being held on a number of charges, the most serious of which was the sale of at least 835 kilos of cannabis with a street value of 15.5 million kroner.
The man also reportedly travelled into Denmark on falsified papers.
A second man was also charged in absentia and will now be sought internationally, police said.
Police believe that the vast majority of the cannabis found its way to Pusher Street while another 100 kilos was sent to Sweden.
Although the sale of cannabis is illegal, it is estimated that marijuana and hash sales in Pusher Street generate around one billion kroner per year.