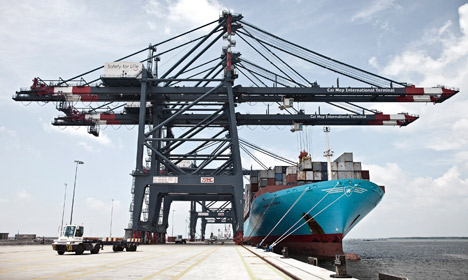 The man was reportedly a senior employee at Maersk's container terminal operating company, APM Terminals. Photo: Maersk Group
“Maersk Group can confirm an employee was abducted in Angola and held captive for four days and that he has been released unharmed,” spokeswoman Louise Munter said in a statement.
The company was providing support for the man and his family “in this difficult time,” she said.
“Due to the ongoing investigation by local authorities and the security of our employees, the Maersk Group will not be providing any further details,” she added.
Denmark-based website ShippingWatch said the man was a senior employee at Maersk's container terminal operating company, APM Terminals, in Angola.
The group's oil unit, Maersk Oil, also operates in the country but said in March it would cut staff in the capital, Luanda, “in view of the continued challenging market conditions for deepwater developments.”
The drop in the price of crude oil has plunged the economy of Africa's second largest crude producer into a crisis, and risks threatening the stability of the country.
Despite the country's oil and diamond resources, the southern African country suffers endemic poverty, with more than a third of the population of around 24 million living below the poverty line, according to the United Nations.