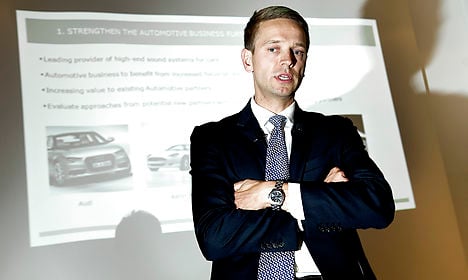 Tue Mantoni is out as CEO after five years. Photo: Keld Navntoft/Scanpix
The company said it had hired Henrik Clausen, most recently the global head of strategy at Norwegian telecom group Telenor, to replace Tue Mantoni, who took the helm of Bang & Olufsen in 2011.
“Tue initiated a dialogue about his longterm commitment with the board of directors some time ago,” chairman Ole Andersen said in a statement.
“Following the completion of a number of important projects Tue will now step down as chief executive,” he added.
The company said on April 15th it had ended takeover talks with China-based billionaire Qi Jianhong, the group's largest shareholder, and his holding company Sparkle Roll after the expiry of a deadline for a bid.
“As Sparkle Roll has not committed to launch a tender offer for all shares in Bang & Olufsen and has not been able to substantiate its ability to launch such a tender offer, Bang & Olufsen's board of directors has today decided to inform Sparkle Roll that it considers the dialogue regarding a potential tender offer terminated,” it said in a statement.
Talks began in November, and in March Qi revealed that he was interested in buying the company for a “reasonable” price.
The maker of upmarket sound systems and televisions, founded in 1925 and known for its clean Nordic designs, has posted annual losses over the past three years as more people listen to music on mobile devices.
To cut costs it last month outsourced the production of its television screens to South Korea's LG Electronics.