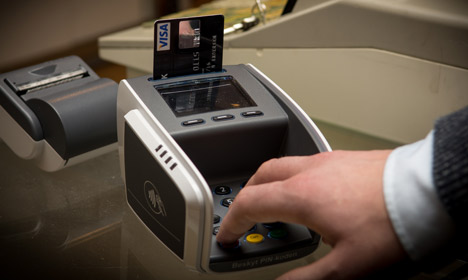 A relic of the past? Half of all transactions are expected to be made via smartphone in just four years. Photo: Colourbox
But that will not be the only change. Nets, the company behind Dankort, may also be on the verge of dropping its ties with Visa.
According to the Berlingske report, Nets has opted not to use Visa’s mobile technology but has instead entered into a new agreement with the Japan-based payment network JCB.
Nets expects that roughly half of all Dankort payments will be made via phone in just four years and the company’s senior vice president said that JCB is “the strongest partner” for the digital future.
See also: More Danes embracing mobile payments
“We see this as an important step toward securing the future of Dankort, which needs to follow mobile developments and remain at the forefront. At the same time we have to make sure that Dankort is the cheapest and most effective payment solution around,” Jeppe Juul-Andersen told Berlingske Business.
A payments expert told financial daily Børsen that dropping Visa for mobile solutions was “highly surprising”.
“This means that Visa’s interest in the cooperation will decrease over time. In the short term this might not unleash a large credit card war on the Danish market, but in the long run there will without a doubt be more cards that the Danish banks can choose between,” Henning N. Jensen said.
Dankort’s mobile solution is expected to be rolled out sometime in the autumn. For many consumers this might not present a huge change, as Danes are already increasingly paying for everyday purchases with their smartphones using solutions like Danske Bank’s Mobile Pay app. Having the national debit card on one’s mobile device is a technological advancement that many Danes have eagerly been waiting for.
See also: Denmark clears the way for cashless society
According to Nets, the average Dankort owner used their card 209 times in 2015. Juul-Andersen said that with so many different payment solutions such as Samsung Pay, Apple Pay, MobilePay, and Swipp on the market, Dankort needs to secure its place as a payment device with an attractive pricing.
But by dropping Visa as a mobile partner, Danes will not have the option of using their phone to access their Dankort outside of Denmark. That means Danes will need to take a physical Dankort or other credit card with them while travelling.
Juul-Andersen said he wasn’t worried.
“We need to remember that just a fraction of our transactions take place abroad. The vast majority of the transactions take place in Denmark and I am convinced that being able to pay with your mobile phone down at the neighbourhood shop will be such a good opportunity that Danes will quickly adopt it,” he told Berlingske Business.
The Dankort was introduced as a national debit card in 1983 and has been partnered with Visa since 1988.