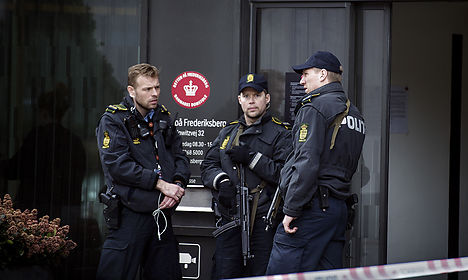 Armed police officers outside the Frederiksberg court. Photo: Liselotte Sabroe/Scanpix
Gunman Omar El-Hussein opened fire on February 14, 2015 outside a cultural centre where the speakers included Swedish artist Lars Vilks, a target of Islamic extremists since he portrayed the Prophet Mohammed as a dog in 2007.
Filmmaker Finn Nørgaard, 55, died and four police officers were injured.
Later that night, El-Hussein fired six shots outside the city's main synagogue, killing security guard Dan Uzan, 37, and injuring two more policemen.
In court on Friday, 26-year-old defendant Bhostan Khan Hossein said that the two men killed were “innocent” victims but that Vilks should have been killed in the attack.
“Those who died were innocent. The cartoonist deserved to die,” he said in a preliminary statement that was read in court on Friday, according to TV2.
Testifying in front of the court, Hossein stuck by his words and said that anyone who insults the Prophet Mohammed deserves to be killed.
“They deserve to die, yeah. I wouldn’t care about him [Vilks, ed.] if he died. I wouldn’t feel bad,” he said.
Friday’s court action also saw an outburst from Hossein’s fellow defendant, 31-year-old Mahmoud Rabae. Judge Marianne Madsen warned Rabae several times about speaking out of turn in the courtroom and it provoked a violent reaction from the defendant.
“You should suck my fucking circumcised dick. Nazi whore,” he said.
The defendant was then removed from the courtroom and placed in an adjacent room where he could hear the proceedings but not disturb them.
Hossein, Robae and their two co-defendants Liban Ahmed Saleban Elmi and Ibrahim Khalil Abbas, 23, are accused of providing El-Hussein with support in the form of ammunition, a hoodie and a bag used in the second attack, and by paying for his time in an Internet cafe where he located the synagogue.
If found guilty, the four risk life imprisonment, which in Denmark means they would be entitled to a pardoning hearing after 12 years.
The trial is expected to run for up to 30 court days through September.