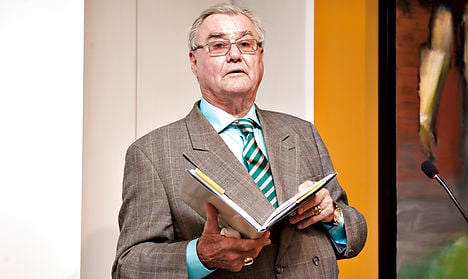 The newly-christened Prince Henrik. Photo: Marie Hald/Scanpix
The Royal House announced on Thursday that the recently ‘retired’ 81-year-old will now simply be known as Prince Henrik.
“It was his Royal Highness’s own decision to chance his title to the less formal Prince Henrik. Prince Henrik believes it is better suited to his current situation after retirement,” Lene Balleby, the Royal House communications director, told the tabloid Ekstra Bladet.
While Henrik now has a new title, it is not the one he truly wants. For years, the queen’s husband has openly complained about not being called king.
See also: Prince Consort Henrik: 'I should be king'
“I have always said that I should be a partner, but I am not considered as a partner because I’m not on the same level as my wife which is completely ununderstandable [sic]. All the queens in the history of the world have made their husbands king consort. Why should I be under my wife?” he told Dutch reporters last year.
“I don’t accept it! I will never accept it,” he added.
In an October interview with the French newspaper Le Figaro he accused the Danes of discriminating against him by refusing to call him King Henrik.
“Why just be prince and His Highness but not His Majesty? I decided to call myself Prince Consort in order to find a place in Danish society and a purpose and position in my work as prince,” he said.
“It makes me angry that I am subjected to discrimination. Denmark, which is otherwise known as an avid defender of gender equality, is apparently willing to consider husbands as worth less than their wives,” Henrik added.
See also: Queen's husband feels 'discriminated' by Danes
The announcement that he wants to know simply be called Prince Henrik was greeted by confusion.
“To be completely honest, I simply don’t understand what is going on. I don’t understand what they [the royals, ed.] are doing nor the point of it,” Jes Fabricius Møller, a royal historian, told Politiken.
Møller’s best guess was that the move was merely symbolic.
“He has wanted to be king, but now instead he is going a level down. It’s a signal that he really wants to pull back and now that he doesn’t want to attend to any official duties, he’s letting his title reflect that,” he said.
See also: Prince Henrik's actions under scrutiny
Queen Margrethe used her annual New Year’s Eve address to the nation to announce that her husband was retiring from his duties and would make far fewer public appearances.
Prince Henrik was born Henri Marie Jean André de Laborde de Monpezat in southwest France. He married the then Princess Margrethe in 1967 and they now have two sons and eight grandchildren.
Henrik's new retirement should have left him plenty of time to find a birthday present for his wife Queen Margrethe, who turns 76 on Saturday.