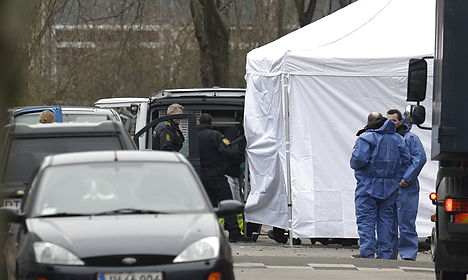 Police technicians at the scene where Omar El-Hussein was killed by police in February 2015. Photo: Claus Bech/Scanpix
In a written statement provided to parliament, PET said that it was the Copenhagen Police’s Special Intervention Unit (Politiets Aktionsstyrke) that killed gunman Omar El-Hussein in a shoot-out shortly after El-Hussein had murdered a volunteer security guard at Copenhagen’s Great Synagogue.
The statement also revealed for the first time how many shots were fired by police officers.
“PET can further inform that according to crime scene investigations in the case, there were 35 shots fired at Omar El-Hussein, of which 29 connected,” the statement said.
PET declined to reveal what type of weapons were used in the shooting.
See also: Police: Better ammo and training needed after Copenhagen attack
El-Hussein, a Danish citizen of Palestinian origin, carried out two shootings that were seemingly inspired by the Charlie Hebdo attacks in Paris a month earlier.
The 22-year-old first fired at least 30 shots at a free speech event, killing one, and then killed a volunteer security guard outside of Copenhagen’s Great Synagogue.
He was killed by police after confronting officers with a gun in each hand.
El-Hussein was born in Copenhagen to Palestinian parents who fled to Denmark via a refugee camp in Jordan. Just two weeks before he spread terror through the Danish capital, he was released from prison for a stabbing offence.
It was behind bars that El-Hussein is thought to have become radicalized. He was on multiple occasions flagged up by prison authorities for expressing “extreme” views on Islam and at one point shared a cell with an inmate who openly supported the Islamic State, but PET said that it had “no reason to believe that the now deceased 22-year-old offender was planning attacks” based on the information from the Danish Prison and Probation Service.
Four men have been charged with terror offences for allegedly providing El-Hussein with support in the form of ammunition, a hoodie and a bag used in the second attack, and by paying for his time in an Internet cafe where he located the synagogue.
If found guilty, the four risk life imprisonment, which in Denmark means they would be entitled to a pardoning hearing after 12 years.
The trial is expected to run for up to 30 court days through September.