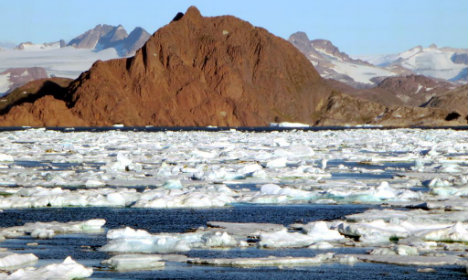 Scientists from the Danish Institute of Meteorology (DMI) recorded melting levels of one percent or more across 12 percent of the Greenlandic ice sheet on Monday April 11th. The former top three earliest dates for ice melts of this level were all recorded in May – in 2010 (May 5th), 2006 (May 8th) and 1990 (May 8th).

Melting season is usually considered to have begun when more than five percent of the sheet ice area melts for three consecutive days.

The results were so unusual the scientists initially suspected a fault with their weather stations.

“We had to check our models were still working properly,” Peter Langen of DMI told Polar Portal. “Fortunately we could see from the [weather] stations that it had been well above melting, even above 10C. This helped to explain the results.”

Speaking to the Associated Press, Langen said the early ice melt could be a harbinger of what's to come.

“It's disturbing. Something like this wipes out all kinds of records, you can't help but go this could be a sign of things we're going to see more often in the future,” he told AP. The abnormally high temperatures also took in data collection sites higher up on the ice sheet, with one station at 1,840m above sea level recording a temperature of 3.1C.

“That would be a warm day in July, never mind April,” Robert Faust, a scientist with the Geological Survey of Denmark and Greenland (GEUS), which maintains data from the stations, told Polar Portal.

DMI’s observation station at the Summit of Greenland – the apex of the ice sheet – recorded a record high for April of -6.6°C. But the Greenlandic heat wave did not only affect the ice-capped regions of the arctic island. In coastal Kangerlussuaq, a high of 17.8°C was measured on Monday, one of the highest temperatures DMI has recorded on the Greenlandic coast since 1873.

The melt is reported to have been caused by warm air coming from the southwest, bringing rain over the coast. By contrast, the northern and eastern parts of Greenland have seen colder than usual temperatures as a result of the same phenomenon.

Weather forecasters Marie Rasmussen and Jesper Eriksen of DMI said that they expected temperatures to drop back to normal, cooler levels during the course of this week – although a second front may yet bring more melting to the south.

Meltwater and rainfall on this ice sheet at this time of year usually refreezes, which can make future melts more likely, Jason Box of GEUS, who is leading a Danish research project into the Greenlandic ice melting, said.

“Meltwater refreezing releases heat into the snow at depth, reducing the amount of heating needed for melt to start and forming ice layers that can help melt water run off the ice sheet earlier with climate warming,” Box told Polar Portal.