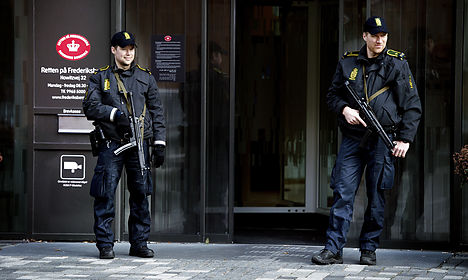 Security was tight when four suspected foreign fighters made a court appearance on Friday. Photo: Liselotte Sabroe/Scanpix
Four people were arrested in Thursday's daytime raids, while two additional people were apprehended on Thursday evening on weapons violations as a result of the initial searches.
“At one of the addresses we [searched] today we found some weapons and ammunition,” police inspector Poul Kjeldsen told reporters.
Additionally, it was revealed on Friday that police have also decided to charge a fifth man with violating Denmark's terrorism laws by being recruited to join Isis. That man is a brother to one of the four who were arrested Thursday in the Copenhagen area.
Under Danish law, “letting oneself be recruited to commit acts of terrorism” is punishable with up to six years in jail.
One of the addresses searched on Thursday was linked to a 27-year-old man whose name appeared in leaked documents that were given to Britain's Sky News, containing information on jihadists who have joined Isis.
Politiken newspaper reported that a second arrestee was also named in the leaked documents.
All six individuals are scheduled appeared at a preliminary hearing on Friday that was held behind closed doors.
According to broadcaster DR, all four of the original arrestees have known gang connections. Police wrote on Twitter on Thursday that a person living at one of the searched addresses had ties to one of Copenhagen's criminal gangs.
Police have not yet given any indication that those arrested had plans to carry out terrorist acts within Denmark.
Authorities have expressed concern however that violent gang members who have become radicalized could carry out an attack similar to the one in Copenhagen in February 2015, in which a Danish-Palestinian gunman and former petty criminal killed a filmmaker and a Jewish security guard in twin attacks that were seemingly inspired by the deadly assault on French satirical weekly Charlie Hebdo.