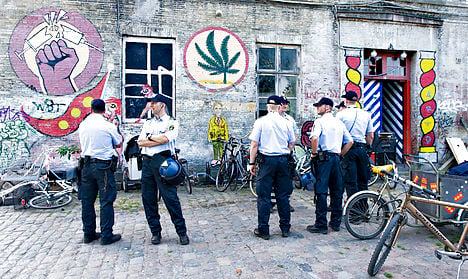 2012 file photo of Copenhagen Police in Christiania. Photo: Jens Nørgaard Larsen/Scanpix
Amphetamine seizures, however, were significantly down from the year before.
According to a press release, police snatched 3,618 kilos of cannabis in 14,680 incidents in 2015. Both figures are at their highest in 16 years.
“Not surprisingly, it was Copenhagen Police that was responsible for the biggest combined amount with 1,239 kilos confiscated from 4,177 seizures,” the National Police wrote.
The high 2015 numbers for cannabis came despite a massive raid in Christiania in March 2014 that was described as Denmark’s largest ever cannabis case. In total, 76 people were sentenced to a combined 187 years and three months for selling cannabis in Christiania,  a former hippie commune in the heart of Copenhagen that is now the centre of a billion-kroner drug industry.
In contrast to cannabis, amphetamine seizures were at a 16-year low, with just 190 kilos confiscated throughout 2015. Police seized 70,000 ecstasy pills, the largest amount since 2012. Confiscation of MDMA powder, the primary ingredient in ecstasy pills, was also up significantly.
The police said that some 29 kilos of heroin were seized in 2015 and while that was more than double the 2014 and 2013 amounts, it was still in line with stats from earlier years. The amount of cocaine seized was 547 kilos, which police characterized as “at the high end of the scale” when compared to earlier years.
Police said however that conclusions on Danes’ drug habits could not be made based on the year-end seizure figures.
“It is important to stress that even significant increases or decreases are not necessarily indications of a change in the general drug situation,” the police wrote.