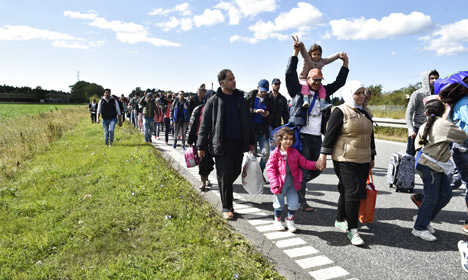 Danish parties want legislation that would allow them to reject asylum seekers in 'emergency' situations, such as what was seen in September. Photo: Bax Lindhardt / NTB scanpix
Least of all in Denmark, where Norway’s southern neighbour has also introduced a long line of initiatives meant to discourage would-be asylum seekers.
Following the presentation of Norway’s bill on Tuesday, several Danish parties that support the current Venstre minority government said Denmark should adopt some of the Norwegian approach.
Of particular interest to the Danish parties is a provision in the Norwegian bill allowing Norway to deny entry to all asylum seekers who do not come directly from countries in conflict in emergency situations.
The provision would only be implemented if the Norwegian government concludes that the European response to a new large influx of refugees “does not work”. PM Erna Solberg also previously said that the legislation could be implemented “in the event that it all breaks down”, pointing specifically to the strain on neighbouring Sweden, which took in 163,000 asylum seekers in 2015 and expects an additional 100,000 this year.
Under the emergency provision, asylum seekers entering from Russia or other Nordic countries would be immediately rejected at the border if they are not coming directly from areas of conflict.
The anti-immigration Danish People’s Party (DF) proposed last month that Denmark implement a similar plan to turn people away at the border if it can be proven that they came from a safe country.
Following Tuesday’s presentation of the Norwegian bill, the party once again called on Danish Integration Minister Inger Støjberg to pursue a similar measure.
“That the Norwegians are taking this step is completely understandable. Many of the asylum seekers who come to the Nordics have been in other countries, including the Nordic countries,” DF spokesman Peter Skaarup told Politiken.
“Just as they [the Norwegians] have a challenge in relation to the other Nordic countries, we have a challenge in relation to Germany, which we also consider to be a safe country,” he added.
Simon Emil Ammitzbøll, a spokesman for government support party Liberal Alliance, said it was “completely unbelievable” that Denmark hasn’t stopped people arriving from safe countries from seeking asylum.
“We can look enviously to Norway and I can’t see a single reason for why we shouldn’t do the same,” he told Politiken.
As is the case in Norway itself, opinions of the country’s hardline approach are split.
Danish opposition party the Social Liberals (Radikale) slammed the Norwegian asylum approach.
“It’s a crazy proposal. The Norwegian government is challenging basic human rights and is actually saying that there are situations in which they don’t apply,” party spokeswoman Sofie Carsten Nielsen told Politken.
The Norwegian asylum package was presented to parliament on Tuesday and will go to an open hearing on April 28th.
On Friday, Norwegian Integration Minister Sylvi Listhaug will visit her Danish counterpart Støjberg in Copenhagen but the latter declined to comment on whether Denmark had plans to copy the Norwegian provision.