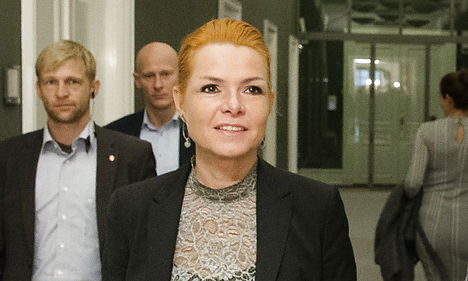 Integration Minister Inger Støjberg's 'jewellery law' netted plenty of media coverage, but no confiscations. Photo: Jens Astrup/Scanpix
Since February 5th, Danish police have had the authority to confiscate cash and valuables above 10,000 kroner from arriving asylum seekers. What has come to be known as Denmark’s ‘jewellery bill’ was a provision in a wide-ranging immigration overhaul approved by parliament on January 26th.
The government justified the ‘jewellery law’ and defended it in the face of international criticism by saying that asylum seekers who can afford it should help offset the costs of their time in Denmark.
But now that the provision has not been used a single time in two months, it would seem to support the argument, presented by both supporters and detractors of the bill, that the ‘jewellery law’ is more about sending a signal to would-be refugees than it is about offsetting costs.
The chairman of the Danish Police Union ( Politiforbundet) said he wasn’t surprised that officers have not used the authority given to them by the provision to confiscate valuables from arriving refugees.
“I have always expected that this could only become an issue for the police on a very small scale,” Claus Oxfeldt told Ritzau.
The ‘jewellery law’ put Denmark squarely in the international spotlight, with human rights groups describing the bill as “despicable” and “vindicative” and some international commentators even drawing parallels to the confiscation of gold and other valuables from Jews by the Nazis during the Holocaust.
Prime Minister Lars Løkke Rasmussen has consistently brushed off international scrutiny of the law by saying that Denmark has “nothing to be ashamed of” and that reports of a damaged reputation are overblown.
Following the furore of Denmark’s plans, it also came to light that numerous other countries – including Sweden, Norway, Germany and Switzerland – also have similar provisions on the books
Denmark registered 21,000 asylum applications in 2015, making it one of the top EU destinations per capita for migrants after Finland, Austria, Germany and Sweden. The government expects another 25,000 asylum seekers in 2016.