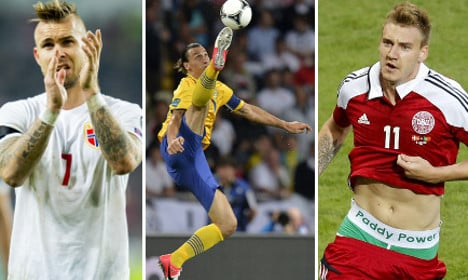 Norway's Marcus Pedersen, Sweden's Zlatan Ibrahimovic and Denmark's Nicklas Bendtner, who've all played in previous big tournaments. Photos: TT/Scanpix/Vegard Wivestad Grøtt; TT/Denis Tyrin;TT/Michael
The Nordic countries announced their plans for a combined bid in a media statement released after the region's football associations met for talks over the weekend.
Jesper Møller, head of the Danish Football Association (DBU) said that efforts would focus on “sustainability, volunteerism and well-being”, while promoting an environmentally friendly and transparent approach.
“The Euros is one of the biggest events in the world of football, and it is great for all of us who love football,” he said.
Swedish, Danish, Norwegian and Icelandic representatives alongside officials from Finland and the Faroe Islands are set to brainstorm the deal's details at a meeting in Greenland scheduled to take place in August.
France is currently counting down the days until it hosts the next European Championship, Euro 2016, with the group stages kicking off on June 10th. Sweden and Iceland are the only Nordic countries to have qualified for the tournament.
The competition, which takes place every four years, is usually led by just one or two host nations. However Euro 2020 will be staged in 13 different countries, including Denmark, in a nod to the 60th anniversary of European football contests.
Uefa says the move is also designed to “give some countries and cities the potential opportunity to be part of a tournament they may otherwise not be able to host”.