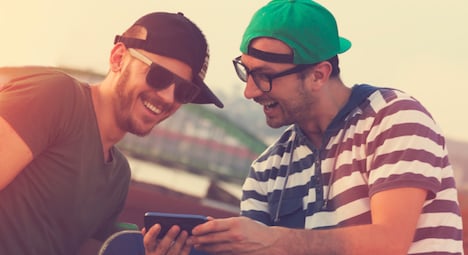 Yup, in case you’ve been locked in a meeting all morning and failed to check the date – it’s April 1st, and The Local’s sites across Europe have made it their mission today to catch you out.

So no, France is not actually planning to force Brits in France to learn French to “dinner party” level if Britain votes to leave the EU. There will be no Académie Française patrol vans to make spot checks on expat businesses and monoglot Anglophones will remain free to stick to 'bonjour, biere and baise moi’, as our fictional interviewee Mike Stevens put it. We hope we haven’t given the French authorities any ideas here.

Still, we seemed to fool a few of our Twitter followers (or maybe you were just being good sports). Still, we have it on good authority that at least one newspaper in London asked its Paris correspondent to cover the story. Very satisfying.

I use to joke about language police becoming a thing in France.

And in bad news for anyone who thinks the Danes have been looking a bit too smug of late, it’s also not true that Denmark has been banned from international ranking lists. It will therefore continue to bask in the glory of being the happiest country on earth, the best country for women, the best democracy and the least corrupt nation – at least until Norway pips it.

Norway, however, will have to manage without the Shetland Islands, which it won’t be buying off the UK. Nor will it get hold of the Faroe Islands, however much oil money it waves around.

And while Italy actually might start giving classes about wine to six-year-olds (no folks, that wasn’t an April Fool), there won’t be a wine shortage this year. Or if there is, it won’t be caused by picnicking German tourists eating all the grapes.

Nor will Germans back home be facing an attack on their freedom to enjoy a good beer. These horrifying warnings on bottles of brew were purely a figment of our imagination.

On our Swiss site, we are always keen to encourage newcomers to Switzerland to appreciate the delights of a good fondue, there aren’t actually plans afoot to eject foreigners who can’t pass a cheese test (whatever politician Hans Käselieber – or Mr Cheeselove – might say).

When all is said and done, we felt a tiny bit cruel for getting Abba fans excited about the legendary Swedish band’s reunion to save the Greek island featured in Mamma Mia. That also means that our island tourist boss Christos Flipflopolous won’t be getting local bakers to start working on a cinnamon bun souvlaki. Sadly.

Meanwhile, the team on The Local Spain seem to have sparked genuine excitement from drone enthusiasts (at least to judge by our Twitter feed), with their story that drones would be dispatched to squirt suncream over pasty northern Europeans on the country’s beaches. Maybe they’ve accidentally hit upon a brilliant idea?

Finally, we can reassure history lovers that no caped men have stolen priceless – and reputedly magic – relics from Vienna museums in a bid to win power over Austria. Phew.

Thanks for joining in the fun – and rest assured that every story from here on should be believed!