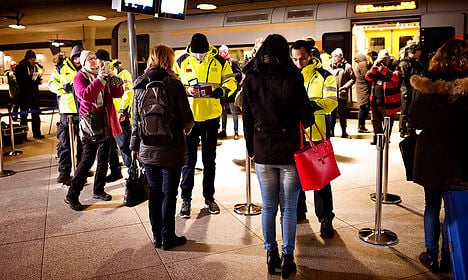 Danish rail operator DSB will not be forced to pay 13 separate fines. Photo: Nils Meilvang/Scanpix
Ever since Sweden implemented mandatory ID checks on January 4th, transport companies have been required to check all passengers for photo identification and were told that they would face a fine of 50,000 Swedish kronor (40,400 Danish kroner) if they failed to do so.
But Henrik Olars of the Swedish Transport Agency (Transportstyrelsen) said that the companies will not be forced to pay up after all.
“We have written off the majority of cases,” he told Sydsvenskan.
The agency said that Danish rail operator DSB, Swedish transport authority Skånetrafiken and ferry operator Scandilines were all able to give adequate explanations for why travellers were allowed to cross into Sweden without the required ID.
“The reason we have written off these cases is that based on the information we have received, we are not able to assess whether the transport company has violated its verification obligations,” Olars said.
The Swedish bus operator Bergkvarabuss may still have to pay up in the 26th case, in which a bus driver refused to kick a Somali teenager out of the vehicle when it was -12C outside.
By writing off the 25 fines, the Swedish state has waved goodbye to a combined 1.25 million Swedish kronor.
Sweden’s decision to implement mandatory ID checks on all arriving train, bus and ferry passengers caused Denmark to follow suit by putting its own control measures in effect at its southern border with Germany.
Both countries have repeatedly extended the temporary measures, most recently on March 3rd. Both measures are set to expire on Sunday but are widely expected to be extended once again.
Sweden put its measures in place after receiving 163,000 asylum applications in 2015. The Danish government has said that its measures are necessary to ensure that those who would prefer to seek asylum in Sweden don’t end up “stranded” in Denmark, which received 21,000 asylum applications last year.
Both nations have seen a significant decrease in asylum cases since the border measures were put in place.