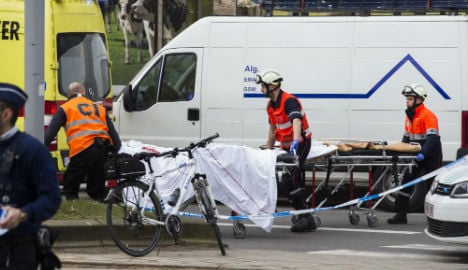 Copenhagen Police warned Danes to expect a heightened police presence, saying they were now on “high alert”.
“We will be more visible. We will, among other things, look out for suspicious behavior and abandoned objects at the airport and at transportation hubs in Copenhagen such as Nørreport and the Central Station, a duty officer with Copenhagen Police told state broadcaster DR.
Brussels airport was hit by two explosions shortly after 8am on Tuesday, then at around 9.20am there were reports of explosions at at least one Metro station in the city.
At least 13 people were killed in the airport blasts according to the latest, unconfirmed, reports and 35 left injured. The latest reports claimed there were 10 fatalities caused by the explosion at Maalbeek Metro station.
Prime Minister Lars Løkke Rasmussen has condemned the blasts as a “despicable attack”.
“Terrorism has hit the heart of Europe. Innocent people have been killed and injured by ruthless terrorists,” he said in a statement.
“My thoughts are with those affected, their relatives and the entire Belgian people. Families and entire human lives have been shattered in an instant. It fills me with anger, disgust and sadness.”
Belgium is not alone. All our solidarity goes to the Belgian society. We stand together in Europe.”
Copenhagen Airport announced on its website that all flights to Brussels had been “cancelled until further notice”.
Jørgen Bonnichsen, the former head of Denmark's Police Intelligence Service (PET), said he suspected the attacks were linked to the arrest of Salah Abdeslam, who had been in hiding since November's terror attacks in Paris, which he´had helped plan and carry out.
“If I could go out on a limb,  I'd think that it is a reaction to the arrest of Abdeslam, not least because we were told by the Belgian authorities that he was preparing a new terrorist act,” he said.
“The Belgian authorities discovered that Abdeslam had built a new network, and it's all very easy to draw a parallel with what has happened now. Whatever Abdeslam was planning has now been executed by those who are left.”