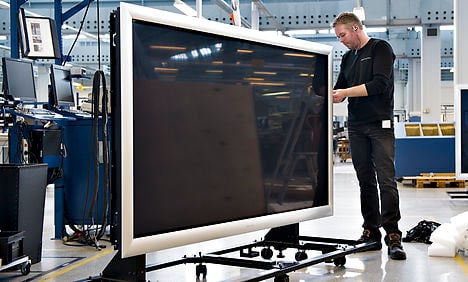 A B&O employee assembles a 105-inch TV in Struer. Photo: Henning Bagger/Scanpix
The struggling Danish firm, which said in November it was in talks with a potential buyer, said the deal “will address Bang & Olufsen's key challenges related to scale and complexity”.
It would enable the group “to stay at the forefront of innovation in the TV category, a category which is currently undergoing significant change,” chief executive Tue Mantoni said in a statement.
The group, which also makes sleekly designed speakers, soundsystems and headphones, said it would now focus on its core know-how in design and acoustics.
The move would result in annual savings of between 150 and 200 million kroner ($23 million-$30 million, €20-27 million), it said.
The partnership's first TV using organic light-emitting diode (OLED) displays — screens that deliver a more vivid picture quality and consume less electricity — is expected to be launched next year.
In February, South Korean LG unveiled its first modular smartphone, the G5, which came with a sound system developed by Bang & Olufsen.
Shares in the Danish company soared in November after it said it was in talks over a potential takeover offer.
On Friday it said that the talks were continuing but that no binding offer had been made.
Founded in 1925, the Copenhagen-based company has posted annual losses over the past three fiscal years as more people listen to music on their mobile devices and after failing to attract younger consumers.