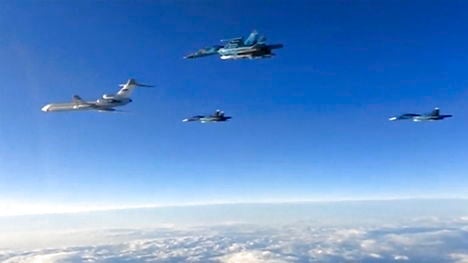 Russian military jets returning home from Syria this week – will they soon return to Danish airspace? Photo: REUTERS/Russian Ministry of Defence/Scanpix
The single incident in 2016 comes after Danish military jets were activated 98 times to respond to Russian airspace incursions in 2014 and 2015, Berlingske reported on Thursday.
A Nato representative confirmed to the newspaper that Russian air activity has tailored off elsewhere as well.
“Thus far this year there ave been significantly fewer Nato activations over Russian air activity in the Baltic region and the Barents Sea,” the representative wrote.
Denmark’s relationship with Russia has been strained by the latter’s flexing of its military muscles. The Russians carried out not one but two separate simulated attacks on the Danish island of Bornholm and Russian activity in and around Danish air space has included near-collisions with passenger planes.
Russia’s ambassador to Denmark has even warned the Danes that they have made themselves a target of a potential nuclear attack by joining Nato’s missile defence system and the intelligence agencies of Denmark, Sweden and Norway have all placed Russian aggression near the top of their respective national security challenges.
Russia and Denmark have also laid conflicting claims over the North Pole.
Danish Foreign Minister Kristian Jensen, who said he wants to “reopen dialogue” with the Russians, told Berlingske he was “of course happy that the tensions are being reduced”, he was cautious about drawing any conclusions from the decrease in air activity.
“It’s hard to seriously compliment the Russians because they have stopped breaking rules and challenging our borders and airspace. When it comes to Russia, I believe what I see,” he said.
“It is very difficult to interpret Putin’s motives,” the foreign minister added.
Military analysts told Berlingske that Russia’s decreased activity in Danish airspace can likely be ascribed to the nation’s role in the Syrian civil war. Putin sent 50 jets to Syria in autumn 2015 before calling them home this week.