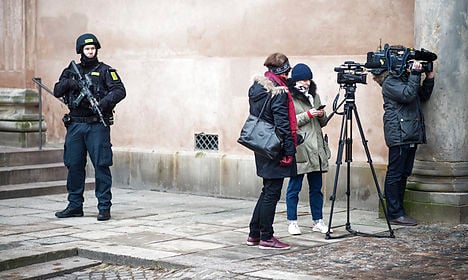 Friday will host the second day of the high-profile trial. Photo: Emil Hougaard/Scanpix
The court was also shown a grisly video of the gunman, 22-year-old Danish-born Palestinian Omar El-Hussein, shooting a security guard at a synagogue in one of the two attacks in February last year.
The footage was part of the prosecution's evidence at the opening of the trial of four men accused of helping El-Hussein after the shootings.
Defence lawyers said their clients were innocent of the terror charges against them.
Prosecutor Bo Bjerregaard said the four men had to have been aware of the intentions of the gunman, whom some had known since childhood.
The court named the four as Liban Ahmed Saleban Elmi, 20, Ibrahim Khalil Abbas, 23, Bhostan Khan Hussein, 26 and Mahmoud Rabea, 31, after lifting a ban on their identities.
The prosecution says they committed a “terror offence” by providing El-Hussein with support in the form of ammunition, a hoodie and a bag used in the second attack, and by paying for his time in an Internet cafe where he located the synagogue.
Read more: Four on trial for helping Copenhagen gunman
Abbas and Elmi are also charged with helping him dispose of the weapon used at the cultural centre.
The footage of Uzan's killing was shown only to the judges at the request of his family. But the full court viewed the images of El-Hussein, Elmi and Abbas in the cafe after the synagogue shooting.
They are seen talking jokingly, and El-Hussein appears to act out pulling the trigger of a weapon.
The prosecution also showed the court the two guns found on El-Hussein's body after he was killed, and three bullets he was allegedly given from a box of ammunition found at Rabea's home.
If found guilty, the four risk life imprisonment, which in Denmark means they would be entitled to a pardoning hearing after 12 years.
‘Didn't want to scare anyone'
They did not testify in court Thursday, but when Bjerregaard cited Denmark's terrorism law, which refers to “he who intends to scare a population,” Rabea interrupted, shouting “I did not want to scare any people.”
To secure a conviction, the prosecution has to prove “intent”, meaning they knew about his plans to commit an act of terror.
The trial is continuing on Friday and is expected to run for up to 30 court days through September. Much more on the trial’s first day can be found here.
El-Hussein opened fire on February 14, 2015 outside a cultural centre where the speakers included Swedish artist Lars Vilks, a target of Islamic extremists since he portrayed the Prophet Mohammed as a dog in 2007.
Filmmaker Finn Nørgaard, 55, died and four police officers were injured.
Later that night, El-Hussein fired six shots outside the city's main synagogue, killing security guard Dan Uzan, 37, and injuring two more policemen.
The assailant was shot dead by police hours later.