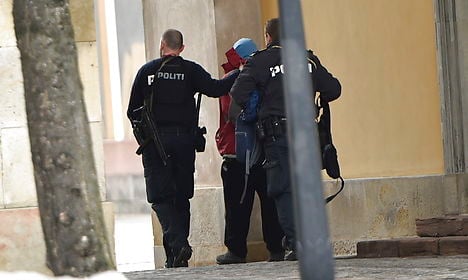 Police lead the man away from Christiansborg. Photo: Nils Meilvang/Scanpix

Copenhagen Police wrote on Twitter that officers had stopped a man wearing a “suspicious belt bag” shortly after 1pm.

In a previous tweet, Copenhagen Police wrote that they had “pacified” the man in question and called bomb personnel to the scene shortly to investigate.

The bomb personnel ruled out a threat shortly after their arrival.

“It was an Italian tourist, whom several other tourists found suspicious because there were some yellow cables hanging out of his belt bag. It turned out to just be some rubber bands. He has been taken to the station so we can explain the situation to him and tell him why he was overpowered,” police spokesman Steen Hansen told TV2.

A photo posted to Twitter by Anders Frandsen shows the police pointing their weapons at two men to the ground outside of the parliament building:

Access to Christiansborg was temporarily closed during the situation but doors were opened again just after 1pm, TV2 reported.