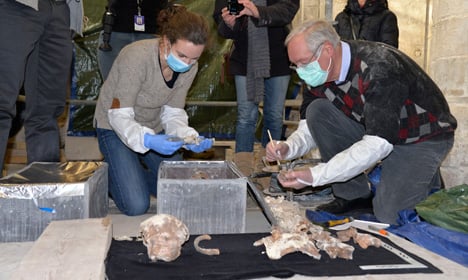 Danish or Norwegian? Teeth hold the answer. Photo: Vegard Strømsodd/Explico / NTB scanpix
Norwegian researchers opened a tomb containing the remains of descendants of Viking leader Rollo in Normandy, France on Monday with the aim of putting an end to a centuries-long debate: was Rollo Danish or Norwegian?
“We have worked on investigating this for about seven years, so to finally obtain material that we can test for DNA is huge,” historian Sturla Ellingvåg told NTB.
Rollo was the founder and first ruler of Normandy, the Count of Rouen and the great-great-great grandfather of William the Conqueror, the first Norman King of England. While Norwegian-Icelandic history holds that Rollo is the same man also known as Ganger Hrólf and hails from Norway, some Danish historians claim that Rollo is from Denmark.
In January, French officials granted a Norwegian application to open the tomb of Rollo’s grandson and great-grandson, Richard I of Normandy (also known as Richard the Fearless) and Richard II, also called Richard the Good.
When researchers opened the tomb, a sarcophagus in the floor of a Fécamp monastery, on Monday they found Richard the Good’s lower jaw with eight teeth. A DNA analysis is likely to be completed by the autumn and will be presented in cooperation with the French authorities.
“Finding teeth is key, because DNA can be found there even after this many years. Two forensic experts from Norway and Denmark took five teeth that will now be sent to the University of Oslo and the Centre for GeoGenetics at the University of Copenhagen for analysis,” Ole Bjørn Fausa, the founder of one of the project’s sponsors, the Samlerhuset Group, said.
Only when the analysis is complete will Danish and Norwegian historians be able to settle their conflicting claims on Rollo.
Fausa said that Fécamp sarcophagus at first glance looked like it was only large enough to hold the remains of a toddler.
“When they were buried in the floor, it was a matter of space. The most important thing was to preserve the skeleton. We don’t know for certain how it was done in this case, but it was common to either cut the bodies into pieces or boil them so the meat would come off the bones. Thus, the sarcophagus needn’t be any longer than a femur, the longest bone in the body,” he said.
He described the atmosphere surrounding Monday’s opening as an amazing experience.
“As far as we know, this is only the second time since the war that a king’s tomb has been opened in France. Just to be a part of it and find the skeletons in there was exciting and unreal at the same time,” he said.
Fausa said that if Rollo is confirmed to be Ganger Hrólf, it will have great historical significance.
“If the British royal family originates from the northern part of Western Norway, it will change the perception that the Norwegian royal family is relatively young with origins from the British and Danish royal houses,” he said. 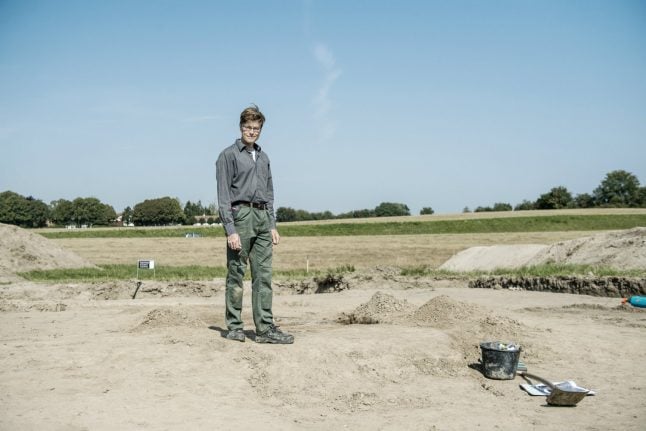