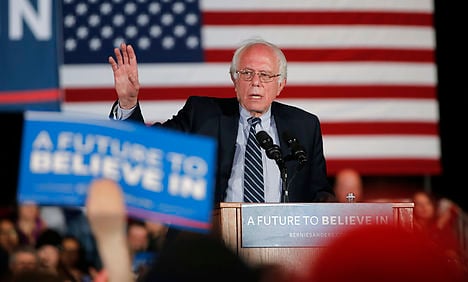 Bernie Sanders was the clear choice of Americans living in Denmark. Photo: Brian Snyder/Scanpix
US Democrats living in Denmark voted overwhelmingly for Bernie Sanders as part of a ‘Global Primary’ held in conjunction with Super Tuesday.
According to Democrats Abroad, the unofficial vote count for in-person voting in Copenhagen was 167 votes for Sanders and just 53 for Hillary Clinton.
Sanders has been a vocal proponent of the Nordic model and has often held Denmark up as an example of the US to emulate. Those Americans already living in under Sanders’s hyped model of “democratic socialism” handed the Vermont senator a clear victory in Copenhagen. Back in the homeland, however, Clinton was the big Super Tuesday winner, claiming seven states to Sanders’s four.
See also: CNN tries to 'feel the Bern' in Denmark
“There were a lot of younger voters, including students, young professionals, and dual Danish/American citizens voting for the first time. If we compare to the demographics of voters in the US presidential primary elections, there's a tendency for younger voters to vote for Bernie Sanders,” David S. Miller, the spokesperson for Democrats Abroad Denmark, told The Local.
“In addition, perhaps even the older voters who live in Denmark and are used to single-payer health care and free college tuition may tend to identify with some of Sanders' policy proposals. But there are certainly strong Hillary Clinton supporters among our membership as well,” he added.
According to the group, 220 American expats cast their ballot in-person. American citizens living abroad who want to vote in the primaries via Democrats Abroad can do so until March 8th. Go to www.democratsabroad.org/gpp to download a ballot.