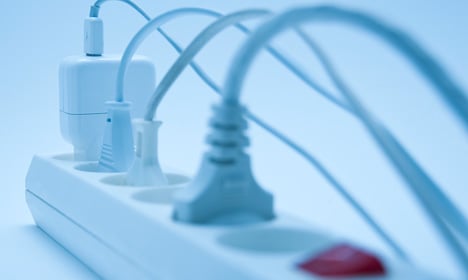 Photo: Colourbox
In 2014, a full 66 percent of the average Dane’s electricity bill went to taxes and fees, while just 15 percent of the cost was for electricity itself and another 18 percent covered transport. This put Denmark head and shoulders above the rest of the EU. Only Germany came marginally close to Denmark’s level of taxation, with German consumers paying 52 percent in electricity taxes.
Eurelectric's breakdown of electricity bills. Click for larger version. Graphic: Eurelectric
The two thirds of Danes’ electricity bills that goes to taxes covers such things as VAT, energy policy levies and a nine percent PSO (Public Service Obligation) tariff, which goes to support renewable energy development.
The Eurelectric analysis showed that without all of those excess costs, Danes would pay electricity costs under the European average.
Lars Aagaard, the CEO of the Danish Energy Association (Dansk Energi) said the high level of taxation is strangling Denmark’s green conversion.
“We aren’t electrifying our consumption where we need to and we have remained stuck on fossil fuels in the transport sector and in our heating systems for far too long. We are not utilizing the full potential of our fantastic ability to get renewable energy into the electric system,” he told Ritzau.
Aagaard said the sky-high taxes on electricity push Danes into less environmentally-friendly choices.
“You are taxed six times as much for the electricity that comes into your electric heat pumps to warm up your house than you are of the oil you can pour in your oil-fired boiler. That makes people choose less energy-effective solutions,” he said.
According to the Danish Energy Association, energy taxes account for 40 billion kroner each year.