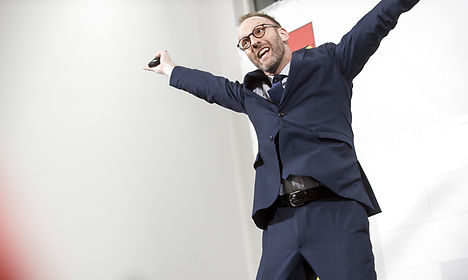 Lego CEO Jørgen Vig Knudstorp presented the company's results on Tuesday. Photo: Palle Peter Skov/Scanpix
Net profit surged 31 percent to 9.2 billion Danish kroner (€1.2 billion), its 11th straight year of growth.
It was more than triple the 2015 net profit at rival US toy maker Mattel, parent company of the Barbie empire, although revenue was higher at the American company.
Lego sales increased 19 percent to 35.8 billion kroner in 2015.
The Billund-based company said it was a record-breaking year for the brand, with an estimated 100 million children in 140 countries playing with Lego bricks and other toys.
Its best-selling product was Elsa's Sparkling Ice Castle, inspired by the hit animated film 'Frozen'. Other top performing lines included Duplo, the Ninjago collection and Star Wars and Friends.
Surging revenues have allowed executives to embark on a hiring spree, with Lego's headcount growing by 11 percent to nearly 14,000 full-time equivalent employees last year.
Referencing his 'Everything is Awesome' dance routine from last year's annual results presentation, CEO Jørgen Vig Knudstorp said the although his dancing shoes were “black and shiny”, he would try to refrain from letting his excitement get the best of him this time around.
“If I could sing and dance, I should be singing and dancing because it was fantastic results that you’re going to walk through with me here,” he told assembled media.