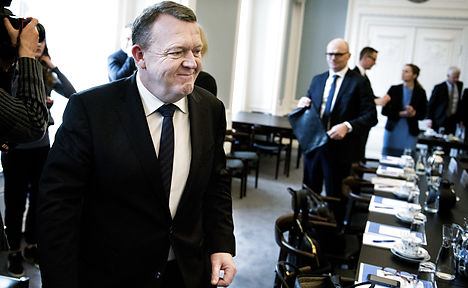 PM Lars Løkke Rasmussen has made getting refugees into work a key element of the three-party talks. Photo: Liselotte Sabroe/Scanpix
The three parties reached an agreement on a 21-point plan to “increase employment focus” in local municipalities’ efforts to integrate refugees.
“This is about how we from now on handle the process between the asylum and the integration phases. What should the municipalities do differently? What are the challenges in the interaction between having a job focus while also supplying Danish language education,” Employment Minister Jørn Neergaard Larsen told reporters after the tripartite negotiations on Friday.
Under the plan, Larsen said that local municipalities must focus exclusively on getting refugees into work, even at the expense of learning the Danish language.
See also: PM: Refugees in Denmark should work 'from day one'
“The municipalities form now on use all of their powers to get people a foothold into the job market and all other activities, for example Danish lessons, should be introduced later,” he said.
Heading in to the negotiations, PM Lars Løkke Rasmussen had made it clear that getting refugees into the Danish labour force would be at the heart of three-party talks.
Denmark has had a poor track record of getting refugees into the labour market. A 2015 analysis  from the Confederation of Danish Employers (Dansk Arbejdsgiverforening) showed that three out of four refugees who came to Denmark in the early 2000s were jobless ten years later.
See also: Denmark's refugee integration has failed
Rasmussen told parliament earlier this month that there is a potential savings of 200 kroner per citizen every time a refugee finds work and leaves social welfare support and he warned that if Denmark’s refugee employment rates are not brought to the level of other non-Western immigrants, the national economy stands to lose 2.5 billion kroner ($300 million) in “just a few years”.
The 21-point plan includes calls for better screening of refugees’ competencies, tying refugees’ housing opportunities to employment, and a “clear requirement that they [refugees] need to work and provide for themselves and their families”.
The plan also calls for Danish language courses to “supplement” the job focus and calls on the language courses to be modernized and made more relevant to the job market. Businesses that hire refugees are also given the opportunity to provide their own language lessons with financial support form the local municipality.
See also: Language holds the key to success in Denmark
The full 21-point plan can be read here (in Danish).
Some 25,000 refugees are expected to arrive in Denmark in 2016 with 17,000 of these eventually being transferred to municipality integration programmes, according to a press release by the Ministry of Employment.