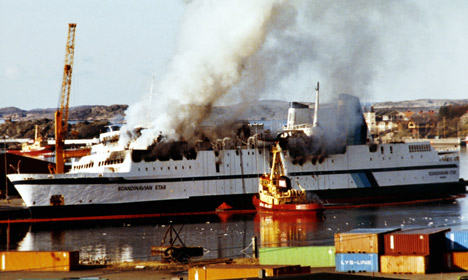 The Scandinavian Star car and passenger ferry caught fire between Oslo, Norway and Frederikshavn, Denmark in the evening of April 7, 1990, killing 159 people. Photo: Per Løchen/ NTB
Investigators of the fatal 1990 fire on the Scandinavian Star have asked the Danish police to speak with retired ship inspector Flemming Thue Jensen, who said earlier this week he knows who is behind the fire that claimed 159 lives. Jensen, however, said he will not cooperate.
While Norwegian police said they will look at Jensen’s new information and speak with others who have come forward with new details, the retired ship inspector has declined a request to speak with Danish police officers.
“We have spoken with him and he does not currently wish to be questioned by the Danish police,” Copenhagen Police spokesman Jens Møller said on Thursday.
See also: After 26 years, new info on fatal Scandinavian Star fire
Oslo Police had contacted their Danish counterparts with the request after Jensen came forward to say that two individuals, who he has refused to publicly name, started the fire 26 years ago.
The Norwegian police have been the subject of massive criticism in the past several days for their investigation of the fire.
The investigation’s leader, Terje Bechmann Dahl, has been under enormous pressure to comment publicly on the case but said he will not do so until a new investigation is completed this summer. Dahl said that police want to speak with others who might have new information about the fire aboard the Scandinavian Star in April 1990.
He says that the spread of the fatal fires is at the very core of the new investigation, as is Jensen’s description of the deliberate rupture of a hydraulic line.
Jensen initially stepped forward in the Danish and Norwegian press on Sunday and met with the Norwegian parliament’s inquiry committee on Monday. He has stated unequivocally that he does not have confidence in the Oslo Police and will not submit to their questioning.
Dahl said he has tried to contact the 72-year-old Dane but has not succeeded.
“He has stated through the media that he knows who the perpetrator is in connection with the Scandinavian Star fire. Oslo Police want to hear his explanation and therefore we have worked with the Danish police to have him brought in for questioning,” Dahl said in a Wednesday statement.
Jensen was one of the first investigators to board the fire-damaged ship and has said that only people from the crew with knowledge of the ship could have been behind the fire. That perception is shared by several other involved parties.
Jensen’s former boss, Knud Skaareberg Eriksen from the Danish Maritime Authority, has also expressed his lack of faith in the Norwegians’ investigation. Eriksen was a member of initial investigators who delivered a January 1991 report on the tragedy.
“Eriksen says he gave four names to the police in 1990. Thus if Eriksen believes that he is able to name the perpetrators, we see it as natural that he would come to the police with that information,” Dahl said.
Twenty-six years after the Scandinavian Star fire left 159 people dead, much remains unexplained. Two individuals have been suspected of the fire throughout the years, but the cases against both were dismissed due to a lack of evidence.
“That means that it who was responsible for the fire has not been clarified. This is still an open case,” Dahl said.