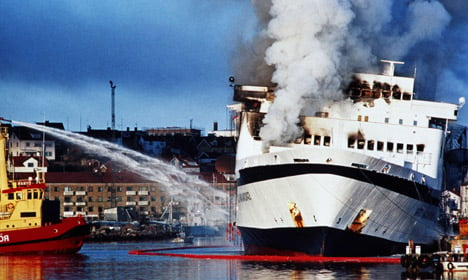 The Scandinavian Star car and passenger ferry caught fire between Oslo, Norway and Frederikshavn, Denmark in the evening of April 7, 1990, killing 159 people. Foto Per Løchen / NTB
Retired Danish ship inspector Flemming Thue Jensen stepped forward in a series of interviews with the Danish and Norwegian press over the weekend to say that the fatal fire aboard the Scandinavian Star was sabotage.
Jensen said that crew members were responsible for the fires that broke out when the ship sailed from Oslo to Frederikshavn in Denmark on April 7, 1990. The flames claimed the lives of 159 people.
“If the Norwegian police had spoken to us and investigated the case more thoroughly, the case would have been resolved in 1990,” Jensen told Norway’s TV2.
“I willl not go in to details because then I would identify the person in question. I will not name the person – the Norwegian police must do that. Not me,” the retired inspector said.
Jensen said the 26-year-old case should be “as easy as a bicycle theft” for Norwegian police to solve.
Norwegian police initially claimed that the fire was set by Danish truck driver who died in the flames, but charges against him were dropped in 2014 when a police report stated that there was not sufficient evidence of his guilt.
See also: Police reopen probe into Scandinavian Star fire
Relatives of some of the 159 people who died have long campaigned for the case to be reopened, arguing that there is evidence to suggest that the fire was a deliberate arson carried out by the ship's crew.
According to Jensen’s new revelations, that is precisely what happened. Retired Danish ship inspector Flemming Thue Jensen held a press conference about the Scandinavian Star tragedy in Oslo on Sunday. Photo: Håkon Mosvold Larsen / NTB scanpix
The retired Dane, who led the investigation of the damaged ship, said the fire pattern was not random.
“It had to have been a conscious and planned action. It wasn’t some lunatic who walked by with a burning match,” he told Bergens Tidende.
Jensen said that iron bed frames were arranged to keep fire doors from closing, allowing the main fire to spread throughout the ship. Likewise, a door to the upper car deck was also propped open to supply the fire with more oxygen. Jensen also said that there was a third fire set that broke out nearly 12 hours after the main fire, well after the ship had been evacuated and only a few crew members remained.
Norwegian police have previously said that the third fire was the result of the previous fire flaring back up but Jensen said his investigation showed that a hydraulic line had been cut in a way that would make diesel leak on mattresses that were deliberately arranged below. He claims that only people will intimate knowledge of the ship’s layout could have set the fires.
Jensen said that he did not tell the full details when he testified before Denmark’s Maritime and Commercial High Court in 1990, including the information about the hydraulic pipe, because his supervisor had only given him a mandate to speak about the incidents before and during the main fire.
At a Sunday press conference in Oslo, Jensen said he would not speak to Norwegian police about his new revelations.
“I don’t trust the Norwegian police but I am willing to testify in court,” he said.
Jensen accused the Norwegian police of never considering who could have benefited financially from the Scandinavian Star fire.
“Among all Danish police investigators, the first rule is to always follow the money. Why didn’t the Norwegian police do that here?” he told Norwegian news agency NTB.
According to NTB, the owners of Scandinavian Star received $14 million in compensation following the fires.
Norwegian police said on Sunday that they would take Jensen’s new information into consideration.
“We will use information that has come forth from the press conference and in the media in our further investigation. The new information will be compared with information already present in the investigation material,” Oslo Police spokeswoman Unni Turid Grøndal said in a press release. A 1990 file photo of the fatal fire aboard the Scandinavian Star. Photo: Claus Bjørn Larsen/Scanpix