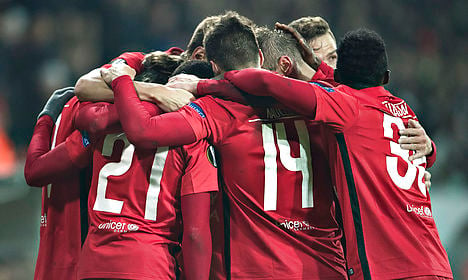 FC Midtjylland topped Man United 2-1. Photo: Henning Bagger/Scanpix
Goals from the talented Pione Sisto and young Nigerian forward Paul Onuachu gave Midtjylland the victory in Herning after Memphis Depay had put a weakened United side ahead in the first leg of their last 32 tie.
That away goal gives United every chance of turning things around in next Thursday's return at Old Trafford but the spectre of a humiliating exit hangs in the air at a time when Van Gaal's side lag behind in their bid to finish in the top four of the Premier League.
The Dutch manager has admitted winning the Europa League may now be his side's best chance of qualifying for next season's Champions League and this latest setback will only increase the pressure on him.
He sent out a weakened side with Sergio Romero replacing the injured David de Gea in goal, and the likes of Paddy McNair and Donald Love featuring from the start against opponents who eliminated Southampton earlier in the competition, and Midtjylland deserved their win.
“It's just not good enough. It's not acceptable. It's got to be a lot better,” admitted United midfielder Michael Carrick, speaking to BT Sport.
“We didn't really kick on after we scored. With a performance and a result like that we go home very disappointed.”
Midtjylland star Pisto said the win was “crazy”.
“That was a good team that we managed to beat,” he told sports channel 6'eren, adding that his team would be ready to take on Man U when the two meet again in Old Trafford.
“It will be a whole other level […] but hopefully we can do just as well,” he said.