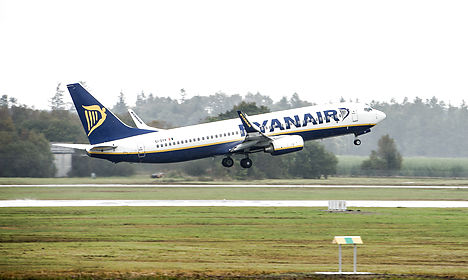 The PM chose Ryanair, the least liked airline of Denmark's leftists and union leaders. Photo: Claus Fisker/Scanpix
Lars Løkke Rasmussen and his companion flew to Malaga on budget airline Ryanair.
“Disgusting!” said one opposition leftist lawmaker on his Facebook page, reacting to the news reported by the daily Ekstra Bladet.
See also: Ryanair vs Copenhagen mayor, round three
Flying for a budget fare sends a “very bad signal”, said Social Democrat Jeppe Bruus, quoted by the Ritzau news agency.
While politicians are usually criticised for spending too much, in Denmark what's more important is where they spend it.
The low-cost Irish airline Ryanair is not a favourite of Danish leftists and union leaders who claim the company's policies for employees are not in line with Denmark's social benefits.
“Ryanair represents a direct threat to the Danish model,” said Henrik Bay-Clausen, representative for the 3F union at Copenhagen airport.

See also: Danish Ryanair row inspires unions abroad
The unions have locked horns with Ryanair for years over working conditions and their political clout cannot be underestimated, as evidenced by the unions successfully running Ryanair out of both Copenhagen and Billund airports, although the airline's absence from the latter was rather short lived.
In fact if you are a civil servant in Denmark's four biggest cities — Copenhagen, Aarhus, Odense and Aalborg — you are banned from flying Ryanair on any city business trip.
No comment yet from the centre-right Rasmussen on his frugal travel plans, but Ryanair competitor Norwegian tried to capitalize off the controversy with a cheeky Facebook ad directed at the PM that touted its free wifi – and collective bargaining agreement.