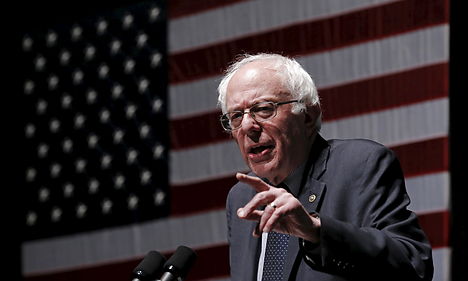 US Democratic presidential candidate Bernie Sanders has often pointed to Denmark as a model to emulate. Photo: Jim Young/Reuters/Scanpix
Whether it’s Democratic hopefuls Bernie Sanders and Hillary Clinton arguing over who loves it more or Ted Cruz joking that fellow Republican candidate Donald Trump would wipe it off the face of the earth, Denmark just keeps getting pulled in to the 2016 race for the White House.
Now CNN has sent reporter Chris Moody to Copenhagen to report on the tiny nation playing a strangely prominent role in the US presidential campaign.
His task was to see Sanders’s hyped model of “democratic socialism” in action in a country where residents “have access to child care, state-guaranteed medical and parental leave from work, free college tuition in which students receive a paycheck from the government during enrolment, free health care and a generous pension, all of which Sanders supports,” as Moody wrote.
See also: Danish PM in US: Denmark is not socialist
Of course, what he found is what those of us living in Denmark already know – and what Danish Prime Minister Lars Løkke Rasmussen tried to drive home in a recent speech at Harvard.
“‘Free' is actually the wrong word to describe these services,” Moody wrote. “Danes pay some of the highest taxes in the world, including a 25 percent tax on all goods and services, a top marginal tax rate hovering near 60 percent. The top tax rate in the U.S., by comparison, is less than 40 percent.”
See also: The Danish Model: Don't try this at home
The CNN report also says that “Sanders would also probably have concerns with the way Denmark has handled the European migrant crisis” and rehashing the controversy surrounding the recently-passed immigration bill that includes a provision allowing authorities to confiscate cash and valuables from refugees (which hasn’t actually resulted in any confiscations whatsoever).
Part of the CNN report can be viewed below, while the rest can be found here.