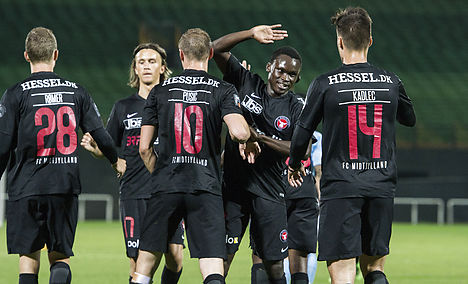 United fans will have to pay a pretty penny to see their club take on FC Midtjylland. Photo: Anders Kjærbye/Scanpix
Those travelling to Denmark are being asked to fork out £71 (675 kroner, $101, €91) to watch the match — that's £49 more than Southampton fans paid for their trip to the Danish champions in the Europa League play-off round in August.
Some fans have prepared a banner with the phrase: 'Welcome to Scamdinavia' on it.
Around 800 United fans are expected to travel to watch their expensively-assembled side play in the 11,800-capacity MCH Arena.
“£71 to watch a Europa League game is extortionate,” said Andy Mitten, author and editor of fanzine United We Stand.
“The combined cost of all three tickets for Manchester United's Champions League away games was only £75.
“Do they think United fans are three times wealthier than Southampton fans? Midtjylland are ripping fans off – their own and the 800 travelling fans.”
FC Midtjylland failed to respond to requests for a comment on Tuesday.
Liverpool and Borussia Dortmund fans have also recently staged protests against the sky-high cost of watching live football.
The protest by Kop fans at their 2-2 draw at home to Sunderland successfully convinced Liverpool to scrap plans to increase the price of their most expensive ticket to £77, instead keeping it at £59.
Sunderland have announced that they will reduce season ticket prices next season, following in the footsteps of West Ham who previously said they would do likewise.d