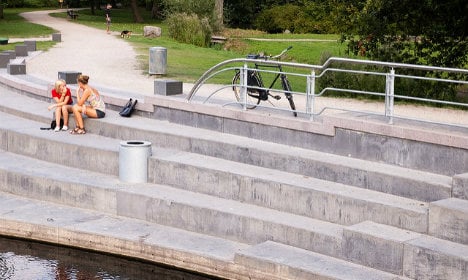 Could you see yourself relaxing at one of Odense's beautiful parks? Photo: Hans Christian Arnklit/Flickr

Odense is a city of roughly 200,000 inhabitants, located on the island of Funen, situated in between the hustle and bustle of the Copenhagen-dominated island of Zealand and Jutland, which connects Denmark with the rest of mainland Europe.

The city has an extremely rich history, from Viking settlements of significant historical value to being the birth place of Denmark’s most famous story teller and national icon Hans Christian Anderson. But Odense isn’t looking backwards these days, it has set its sights on a modernised, vibrant future that will shake off its demeaning reputation as Denmark’s largest village (Danmarks største landsby).

The normally-under-appreciated city got a bit of an international boost recently when The Guardian said it may just well be the most livable city in Europe. But how has Odense managed to take on the fierce reputation of Copenhagen and its plethora of accolades, or even Aalborg for that matter, which was recently crowned ‘Europe’s happiest city’? The key to Odense’s transformation into a vibrant, modernised and relative European city lies in redevelopment, with nearly 30 billion kroner invested in the city's future.

So let’s have a look at five ways the city is shaking up the perceptions that not only Danes but the world has of Odense.

1. Odense is going to become more cycle friendly than a velodrome in the Olympics There has never been a better time and place to get on your bike. Photo: Jimmy Baikovicius/Flickr

Denmark is universally known for its fantastic cycling, to the extent that Copenhagen was named the world’s best city for cyclists. But with 560 kilometres of cycle paths and 123 cycle-only bridges and new developments that will increase these impressive figures, Odense is truly striving to become the cycle city of Denmark, ergo the world.

The new plans for the city will pedestrianise the former thoroughfare of Thomas B.Thriges street, therefore creating an even safer environment for commuters to tear up the cycle lanes and connecting the central area of the city to the harbour and train station.

Even Klaus Bondam, head of the Copenhagen-based Danish Cyclists’ Union (Cyklistforbundet), has admitted Odense is taking the lead over Denmark’s capital city when it comes to bicycle safety.

“In many places in Copenhagen we do have a cycling environment, but you don’t feel safe sending a kid out to cycle. Odense are doing good,” Bondam told The Guardian. What would you do with all the money you could save from moving to Odense instead of Copenhagen? Photo: Howard Lake/Flickr

Denmark is not cheap, in fact it is the fifth most expensive country in Europe. So when looking for a place to settle down in Denmark or take a delightful holiday to see the country that inspired Mads Mikkelsen’s performance in Casino Royale, money is a serious factor.

As it turns out Odense is Denmark’s cheapest city according to a 2015 study conducted by economist Johan Juul-Jensen. For a family in Odense, annual expenses amount to 255,127 kroner – 41,790 kroner less than the most expensive place in Denmark, Helsingør. Although these statistics may be making the middle aged, white collar worker drool onto their keyboards, I can hear the yawns of students and twenty-somethings. So crazy youngsters, how does free beer sound? That’s right party-goers, Odense boasts several bars that offer free beer for an hour on several days, making it one of the cheapest nights out in Denmark. As long as you like Danish beer that is.

3. Music and culture are taking off in a serious way. Tinderbox will be returning to this year, putting Odense on the music lovers map. Photo: Kristian Bang/Wikicommons

As someone living in Odense and working in one of its most popular bars, I get to hear the general opinions from the Danish and international communities about the current developments in the city, primarily from the twenty-something crowd. Surprisingly, urban redevelopment isn’t the focal point of conversation. Instead it is the outstanding strides the city is making to become culturally relative within Europe.

Last year saw the launch of Odense’s new music festival Tinderbox, which due to its success will now be hosting international stars such as The National and Rammstein this summer. Furthermore, the city boasts the largest music library in all of Scandinavia, a place to truly sate your musical yearnings. Not to mention Phono, Denmark’s leading electronic music event for those wishing to rave the night away at the redeveloped harbour.

And if music isn’t your cup of tea, Odense boasts an Oscar qualifying film festival called OFF. As of 2015, OFF winners in two short film categories will be submitted to an Academy Awards pre-jury in Hollywood. Moving to Odense could lead you straight to the red carpet, shaking hands with Michael Fassbender and Cate Blanchet, not a terrible situation to find yourself in at all. Odense is not only trying to make the city a destination for cyclists and cultural connoisseurs, it is broadening its appeal to businesses looking to establish themselves in the developing city.

Coupled with the developments occurring around the city’s central area that are estimated to create 1,000 new work places, developers are focusing on bringing the previously industrialised harbour area back to life after Maersk ceased the construction of shipping containers back in 2012. The plans aim to develop new offices and housing by the waterfront, offering competitive business taxes to companies, investors and entrepreneurs, a plan that the city's mayor, Anker Boye, is firmly committed to.

“It is crucial that we are an attractive city to be in for both businesses and residents, and the level of taxation is a huge factor. Therefore, I have throughout my time as mayor been focused on keeping taxes stable,” Boye told local newspaper Fyens Stiftstidende.

The harbour will also have an outdoor swimming pool located in the middle of the newly developed work spaces, so once that Excel spreadsheet has been polished off you can throw the Speedos on and take a dip metres from your office. Work hard, swim hard.

5. Odense is a tasty multi-cultural haven Whatever food excites your taste buds can no doubt be found in Odense. Photo: Ricardo Liberato/Flickr

Odense may have a strong sense of national identity, but it is also a progressive and diverse city that boasts over 155 different nationalities. The effect of this melting pot of cultures has been delicious, with the city offering an astonishing variety of culinary delights in the city’s breathtakingly large Bazar Fyn. Whether it’s Indian, Greek, Turkish ,or Brazilian food, that you desire (to name but a few), Odense has some of the most diverse and fantastic food you can find in Denmark.