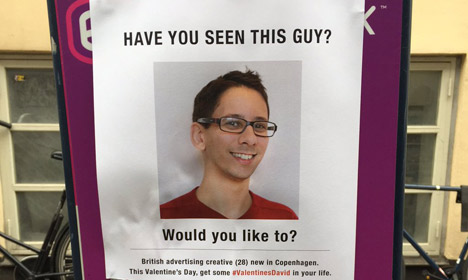 David Felton and his friends put up 100 or so flyers throughout Copenhagen. Photo: Lucy Northway/Twitter
They say that all’s fair in love and war, so British expat and relative newcomer to Copenhagen David Felton decided to pull out all the stops in an attempt to get a Valentine’s Day date.
Felton and his friends hung around 100 flyers throughout Copenhagen to pique the interest of the city’s single ladies. In flyers, modelled after the ones used for missing people or pets, they asked ‘Have you seen this guy? Would you like to?’ and encouraged potential dates to get in touch via Twitter.

Seen today on the streets of Copenhagen. Will #ValentinesDavid find a date? pic.twitter.com/FYrppuqhfi

Tear-off contact slips included lines like 'Sexy British accent' and 'Bicycle included'.
The 28-year-old advertising creative told The Local that he’s had a hard time scoring dates in the four months since moving from New York City to the Danish capital. Rather than stick to online solutions like Tinder, he decided to do something “at least a little bit amusing”.

“In some ways I think Copenhagen is quite conservative, so when you do things that are a little bit wacky and different, you stand out,” he said.
That’s in stark contrast to his last place of residence.
“In New York, this kind of crazy stuff happens all the time,” he added.

The flyers generated some amused tweets but did not get Felton his coveted Valentine’s Day date. That doesn’t mean he was disappointed by his “social experiment”, however.
“I had about a dozen people come forward and say that they thought it was funny, but I didn’t get a date in Copenhagen on Valentine’s Day. But I did get out with a friend to a movie and coffee. All in all, I think it went pretty well,” he said.

Found in the romance section of the library. #ValentinesDavid pic.twitter.com/q9G21AwW2P

Felton said that in his short time in Copenhagen he has learned there are different rules to the dating game here.
“In both the UK and the US it is more accepted to just go up to someone and introduce yourself. I actually dated a girl for four years who I just randomly approached on the street,” he said.
“In Denmark, it’s less acceptable and it feels like you have to be introduced by a mutual friend. That can be quite difficult because it’s tough to make new friends here. There is a weird dichotomy in Copenhagen – people are very friendly but at the same time they are reserved and keep to themselves and their friends. That makes it difficult to meet new people,” he added.
But all hope is definitely not lost.
“You never know what will happen. Someone might see this article and get in touch and say ‘let’s give it a shot’,” he said.
If you're that person, you can reach David via his Twitter account @valentinesdavid or use the hashtag #ValentinesDavid. 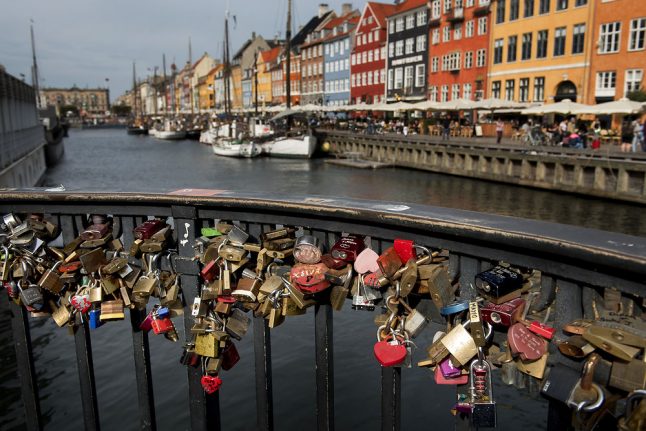 DATING
For the last six months, I’ve been trying to date Danes. Here’s what I found out
Url copied to clipboard!