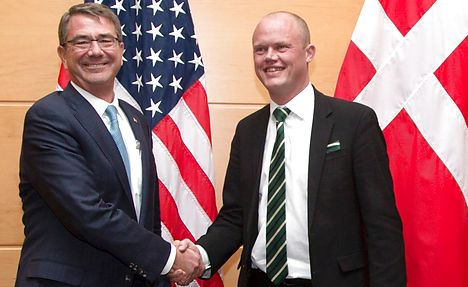 US Secretary of Defence Ash Carter (L) shakes hands with Danish Defence Minister Peter Christensen before a bilateral meeting at NATO headquarters in Brussels on Thursday. Photo: AFP/POOL/ Virginia Ma
Denmark joined the international coalition fighting Isis in October 2014 and Danish F-16s flew 547 missions over northern Iraq, dropping over 500 bombs, before the jets were brought home for repairs.
Although Denmark’s efforts have thus far been confined to Iraq, the government has sent numerous signals that it is willing to expand operations into Syria when the fighter jets are ready to return to action sometime early this year.
In Brussels on Thursday, Christensen told US Secretary of Defence Ash Carter that Denmark’s military would go wherever it is most needed.
“We had a good discussion about where Denmark can best contribute,” Christensen told reporters after the meeting.
“The goal is to fight the Islamic State. It is a long and hard battle, and Denmark is ready to take responsibility,” he added.
Last month, Politiken reported that Denmark is also considering sending 30-50 specially-trained troops on ground missions in both Iraq and Syria.
Christensen’s meeting with Carter was one of more than two dozen meeting the US secretary held with allies in Brussels. He was looking to shore up support for the American-led coalition as his colleague, Secretary of State John Kerry was in Munich engaging in peace talks aimed at finding a solution to the long-raging Syrian Civil War.
According to a report from Reuters, Carter’s mission was to convince the US’s allies to step up the military campaign against Isis, regardless of the outcome of the peace talks.