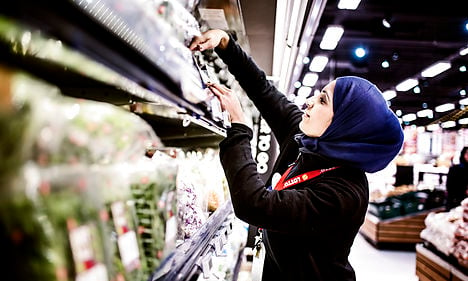 The PM and others say that refugees from work even before they've learned Danish. Photo: Sophia Juliane Lydolph/Scanpix

Getting refugees into the Danish labour force will be at the heart of three-party talks between the government, the labour unions and the employers’ association that get underway on Thursday.

PM Lars Løkke Rasmussen said that he wants to improve refugees' integration by getting them quickly into work.

“Since Europe’s borders were breached, we have found ourselves in an extraordinary situation,” Rasmussen said in parliament on Tuesday, as quoted by Information. “If we don’t solve it, it will worsen our chances of overcoming many other challenges.”

Rasmussen pointed to a potential savings of 200 kroner per citizen every time a refugee finds work and leaves social welfare support.

If refugee employment rates are not brought to the level of other non-Western immigrants, the Danish economy stands to lose 2.5 billion kroner ($300 million) in “just a few years”, the PM claimed.

Some 25,000 refugees are expected to arrive in Denmark in 2016 with 17,000 of these eventually being transferred to municipality integration programmes, according to a press release by the Ministry of Employment.

With the restrictions now in place, the government has tried to pivot toward getting those refugees who are already in Denmark to enter the labour market.

One measure the government aims to make use of is finding a model by which refugees can gradually be brought into employment even though they may not initially be able to work on the same basis as others. This includes making use of the so-called lower ‘apprentice wage’ (elevløn) and enabling refugees to work before they have passed Danish language exams.

“Training should be combined with existing opportunities for Danish lessons and other basic qualifications, supported by a better understanding for the job market,” says the commission statement, according to Politiken.

Last week, the Danish Chamber of Commerce (Dansk Ehrverv) said that it was open to the challenge of employing refugees who could not yet speak Danish, after Løkke stated that this was a potential area in which waiting times for placing refugees in work could be shortened.

“Only four out of ten [refugees] in Denmark are in work after ten years,” Stine Pilegaard, vice-director of the Danish Chamber of Commerce, told broadcaster DR. “So we think it is right to get them into work sooner, so they don’t lose motivation.

“Our experience shows that refugees learn Danish twice as quickly if they are working, compared to in a normal programme of language lessons,” Pilegaard added.

'Introduction income' faces resistance
But it may be more difficult to convince unions to agree to lower-than-normal wages for refugees, even if this is a measure that might encourage businesses to employ them. Finance Minister Claus Hjort Frederiksen met with opposition from employee and employee associations alike when mooting a similar idea, a so-called ‘introduction income’ (indslusningsløn) in January.

Opposition leader Mette Frederiksen of the Social Democrats criticised Rasmussen’s aims for the tripartite meetings as “unambitious”. Frederiksen told DR that integration should not be the sole priority of the upcoming talks, but that the government commission should be focusing on other aspects of the job market, such as finding internship places for the young and improving working environments to avoid the risk of employees becoming ‘worn out.’

The government hopes to reach an agreement by Easter, enabling employers and unions to implement their parts of the deal by autumn 2017.