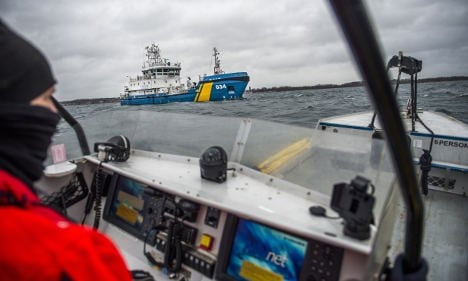 The Swedish coast guard in action this week. Photo: Emil Langvad/TT
Swedish coast guard workers say they are already working day and night to look out for suspected people traffickers helping refugees to travel from Denmark to southern Sweden, despite only one suspected case of people smuggling by boat since the refugee crisis began.
'We have increased the number of hours at sea that we carry out border checks. Nowadays, we are patrolling around the clock so we can have as much coverage as we can,” commander Mats Persson, whose ships are patrolling waters between Kullen and Falsterbo, told the Swedish news agency TT.
“So far we have not noticed any changes,” he said.
However officials say they fear that it could become tougher to monitor potential arrivals once milder weather arrives in the Nordic country and locals who love to sail put their boats back on the water.
“In the spring it will become much more difficult to discern which boats are deviating from usual patterns, but we will continue to focus on strange patterns and behaviours from pleasure boats travelling in the strait,” said Persson.
The Swedish coast guard has also warned that in addition to risking penalties for people-smuggling, potential travellers seeking to make the journey could also be putting their lives at risk.
While the waters between Denmark and Sweden are nowhere near as dangerous as those connecting Turkey and Grece for example, they can still cause problems “if you don't know what to do”, a press spokesperson, Mattias Lindoholm, told TT.
He said that there were no current plans to bring in extra staff during spring and summer, but speculated that the situation could change.
“We are following developments and are prepared to extend monitoring if needed.”
The only suspected case of human trafficking by boat to southern Sweden took place last month, when two men were arrested after arriving in Domsen, north of Helsingborg, in a small inflatable boat. One of the men had a Norwegian identity card, while the other had no documents with him.
Sweden recently stepped up controls on people arriving from Denmark by train, car, boat or plane as part of efforts to more closely monitor the flow of refugees between the two Nordic nations. Denmark then followed suit by implementing controls at its southern border with Germany.
More than 163,000 refugees arrived in Sweden in 2015, a record number, with a further 100,000 new arrivals anticipated this year. Denmark, meanwhile, took in around 21,000 asylum seekers last year.