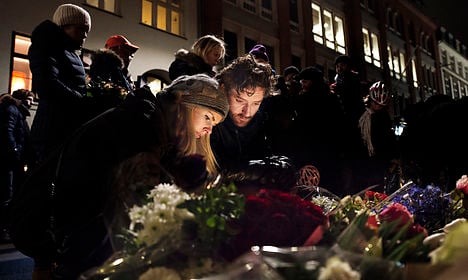 The one-year anniversary of the Copenhagen attacks will be marked on Sunday. Photo: Liselotte Sabroe/Scanpix
The vast majority of respondents to a Voxmeter poll said that they are at least somewhat more vigilant and aware in public spaces than they were before the attacks while one in ten said the attacks made them much more aware and suspicious of both people and objects.
Terror researcher Carsten Bagge Laustsen from Aarhus University said that even though the poll results show that Danes are more on alert than they were before Omar El-Hussein killed two people in the February 14-15 attack, it doesn’t mean that they are afraid to be in public spaces.
“First of all, there is a general understanding that the risk of being hit by a terror attack is so microscopic that there is more likelihood of dying from a bee sting. And secondly, people understand that the attacks in Copenhagen were aimed specifically at Lars Vilks, who had drawn Mohammed, and against the Jewish community,” he told news agency Ritzau.
See also: Copenhagen terrorist had Quran during attacks
Laustsen said that Danes' high levels of trust in public authorities has played a role in the reaction to the terror attack.
“In Denmark, we are world champions in social trust and there is a general perception that the state and the intelligence community are prepared to meet the threat. Therefore, there is an understanding that the attack last year was an exception,” he said.
While everyday Danes say that they are more wary in the aftermath of the attacks, the official response from Danish authorities was being criticised days ahead of the one-year anniversary as an overreaction.
Lars Erslev Andersen, a senior researcher at the Danish Institute for International Studies, told broadcaster DR that the billion kroner allotted to intelligence agencies and the extra resources demanded by Danish police have been “out of proportion”.
“We saw an overreaction and we are feeling the effects of them. Police are feeling the effects and the public coffers are feeling an effect,” Andersen said.
Police districts across Denmark have complained of being stretched so thin by anti-terror assignments that they can no longer properly carry out regular police work. Meanwhile, a controversial plan to reintroduce the monitoring of Danish residents’ online activities is positioning the need to combat terror as a justification for what many say will compromise individual privacy.
Kirstine Sinclair, who researches Islamism at the University of Southern Denmark, agreed with Andersen’s assessment.
“I think that from the political side it was an overreaction to so quickly send all of that money to the intelligence agencies,” she told DR.
The former head of the Danish Security and Intelligence Service (PET) also said that the political reaction to the attacks was too rushed.
“It would have been sensible to give enough time to think about how to get the best possible security for the extra resources. I'm not sure that has been answered yet,” Jacob Scharf told DR.
The one-year anniversary of the Copenhagen terror attack will be marked on Sunday. The two victims, filmmaker Finn Nørgaard and synagogue security guard Dan Uzan, will be honoured at a ceremony at Christiansborg, which Vilks has said he plans to attend. Following the ceremony there will be a procession through Copenhagen.