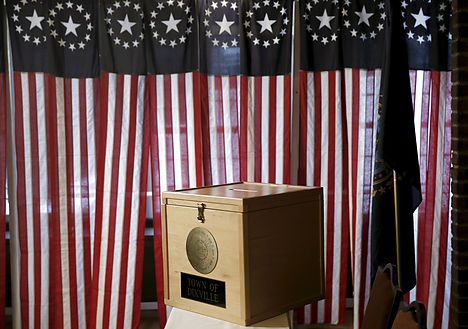 Even if you won't be anywhere near this ballot box in Dixville Notch, New Hampshire – or anywhere else in the US – you can still take help decide the next US president. Photo: Mike Segar/Scanpix
Even if you’re living thousands of miles away from the United States, don’t fret – you can still have your voice heard from abroad.
The Local looks at the fairly simple steps involved in getting to vote in the state primaries and the general election in November.
Voting absentee in your state
To vote in your state’s primary and presidential elections (and for some states, local elections), you first have to register online with the Federal Voting Assistance Program. Registering once means you’ll receive both a primary ballot and a ballot for the general election in November.
The US State Department recommends doing this for those living abroad at the start of each election year so you can keep getting ballots sent to you, as many states do not automatically send you your primary and general election ballots unless you re-register. It doesn’t hurt to re-register, even if your state does send the ballots to you automatically from a previous registration.
Then print, sign and send the resulting form to your state election office, which is listed on the form. Many states let you scan the signed form and email it to them. You should get your ballot by mail or electronically (depending on the state) 45 to 30 days before the primary election this winter or spring and the November 8th general election.
What if you don’t have a US address?
Don’t worry! Just register with the last state where you lived most recently before leaving the US. If you are an American citizen born outside the U.S. or were born in the U.S. to two non-American citizen parents and are no longer living in the U.S., you use the voting address of where your American parent(s) (or in some cases grandparent) or non-American parents last lived, even if no one in the family is still living at that address.
Twenty-four states plus Washington, DC allow American citizens who have never lived in the US to register where a parent is eligible to vote. Find a list of these states here.
Many other states allow it as well, even though they’re not on the list, so you should request a ballot no matter what. If you run into problems, you can send an email to [email protected] to ask for assistance.
Vote in-person at the Global Primary (if you’re a Democrat)
Unlike Republicans, Democrats who live abroad get to choose to vote either in their home state primary or in the Democrats Abroad Global Presidential Primary (but not both) from now until March 8th. Democrats Abroad has state-level recognition in the Democratic National Committee, and sends delegates to the Democratic National Convention in July.
For the Democrats Abroad primary, you can vote in-person or by absentee ballot. If you’ll be in the Copenhagen area, you can vote in-person at the Democrats Abroad voting centre on March 1st from 12 noon to 8 PM at:
Cafe Holberg No 19
Holbergsgade 19D
1057 Copenhagen K
You must be a registered member of Democrats Abroad to vote, and it’s free to register. You can register online beforehand at the Democrats Abroad website or in person the day you vote at the voting centre. Just bring your US passport along.
If you want to vote in the Democrats Abroad primary by email ballot, go to their Global Presidential Primary web page for instructions and a downloadable ballot. Simply print out the ballot online and email it to [email protected] or mail it to:
Voter Registration
c/o IFS
Petersdalvej 1A
2770 Kastrup
Democrats Abroad only holds a primary election, so for the general election in November, you vote via your state’s absentee ballot.