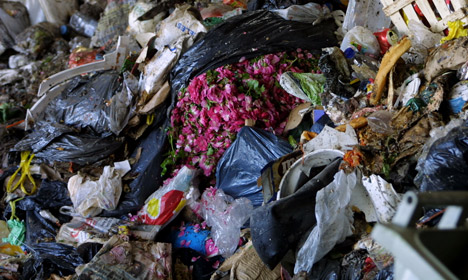 How far would you go to reclaim your wallet? Photo: Colourbox

What defines courage? What makes a man or woman remembered as one who stared danger in the face in order to climb their own personal Everest? While the world is full of everyday heroes who have climbed to great heights, one man in eastern Jutland showed his unfailing determination by plunging to great depths – and into a stinking pile of rubbish.

The man faced a dilemma many would shudder at the very thought of, a horror incomprehensible within a capitalist society: the loss of one’s wallet down a rubbish chute.

The Aarhus man thus decided to take the plunge, literally, into the heart of darkness and fearlessly followed his wallet underground, into the pungent belly of the beast.

Disregarding all common sense, logic and intelligence, he willfully journeyed down the several metre-long chute to be reunited with his wallet. But alas, there was no clear way back to the comfort of civilisation. The man was trapped, surrounded by refuse and alone.

Yet remarkably the man did not lose hope in the face of such a predicament. He fished his phone out of his pocket and called emergency number 112. The East Jutland Fire Brigade responded to the call at 11.09pm on Sunday and were able to free the man from his cramped and rank quarters.

“He had quite simply crawled down the chute. It's one of those rubbish chutes that stand out on the street that one can lift up to empty and those are at least a few metres deep,” fire brigade spokesman Johnny Damgaard told TV2 Østjylland.

The man was not only brought to safety, he was reunited with his wallet. Before pinning a medal on this noble hero, however, one might stop to consider a very key detail. The wallet had actually been in his pocket before he travelled down the waste shaft, and in fact the whole experience could have been avoided if he had merely checked his pockets thoroughly.

“When he was down in the rubbish chute, he realized that the wallet was in his pocket, but he was thankful that we could help him,” Damgaard said.

It even turned out that this was not the man's first such experience. He told his rescuers that he had previously lost 2,000 kroner down a similar chute.

POLITICS
Could next party in Danish parliament be led by AI?
Url copied to clipboard!