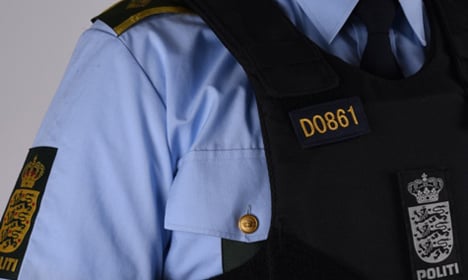 Photo: Danish National Police
“The ID number will make it easier and safer to identify individual officers. This is relevant, for example, in connection with residents’ complaints about police officers,” the Danish National Police (Rigspolitiet) wrote in a press release.
According to the police statement, officers are obligated to identify themselves to residents if requested but can now opt to give their ID number rather than their name.The new badges consist of one letter and four numeric digits and mark the conclusion of a discussion that has been underway in Denmark for years.
There have long been calls for the implementation of a police identification system, owing to the fact that many complaints against the police are dropped because of difficulties in identifying the particular officers involved. This was most clearly demonstrated by a high-profile case in which an innocent cleaning man was wrongfully detained for hours during the COP15 climate talks in 2009.
Despite a widely-circulated photo clearly showing the faces of several officers, the lack of ID numbers and officers’ unwillingness to disclose information resulted in an investigation into the police behaviour being dropped.
The Justice Ministry began drafting a plan to make officers more easily identifiable back in 2011. In October 2014, it was announced that a working group made up of members of the National Police and the Danish Police Union (Politiforbundet) had agreed upon a new identification system.
The group refrained from suggesting that officers wear name badges, and settled on the new badge system that made its official debut on Monday.
Frederik Strand, the director of the museum Politimuseet, wrote in an October 2014 op-ed in Politiken that Danish police wore visible ID numbers on the uniforms between 1863 and 1918.
After a violent clash between officers and residents, individual cops were identified by name and badge numbers in flyers and pamphlets distributed throughout Copenhagen, leading the Copenhagen Police Union to appeal to the Justice Ministry to remove the ID numbers. The ministry accommodated the request in November 1918, Strand wrote, and Danish police officers were not individually identified for the better part of a century until the new rules took effect on Monday.
Under the new rules, officers will be able to change their identification numbers if they face harassment or a specific security threat.