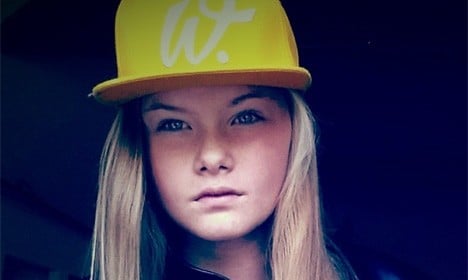 A selfie posted to the teen's Instagram account. Photo: Instagram
Now 16-year-old Lisa Borch will serve nine years in prison for killing her mother in October 2014, while her 29-year-old accomplice Bakhtiar Mohammed Abdullah was sentenced to 13 years in prison followed by permanent expulsion from Denmark.
The Western High Court thus upheld the September ruling of a lower court.
According to Ekstra Bladet, Borch’s sentence is the harshest ever handed down to a teenager in Denmark.
During the girl’s initial trial, it was revealed that she had become radicalized by watching Islamist propaganda online.
See also: Danish teen who killed mum 'inspired by Isis'
“She has said herself that she sometimes watches Islamic State videos,” prosecutor Karina Skou told AFP. The investigation did not determine which videos from the terror group – alternately known as Isis or IS – the defendant had seen.
On the October 2014 night she stabbed her mother, Tina Rømer Holtegaard, at least 20 times, Borch had also reportedly been watching videos of beheadings.
Ekstra Bladet reported that in the High Court case, Borch tried to place all of the blame on Abdullah and said that she lied in her previous testimony because she was “scared of Bakhtiar”.
Following her September conviction, Borch’s stepfather stepped forward to say that the teenaged Dane was obsessed with Isis.
“She loves to talk about IS and their brutal behaviour in the Middle East,” 58-year-old Jens Holtegaard told Ekstra Bladet.
In a later interview with the tabloid, however, he said she was no radical Islamist.
“Her radicalization is something that only exists in her head. She could have just as easily been attracted to the biker gang environment or some other extreme,” Holtegaard said.
According to reports from the courtroom, neither defendant expressed any emotion when the court upheld their sentences.